Well, Charlie jumped and I stayed on.  It wasn't anything big (he could have trotted over it if he wanted), but it was my first time jumping something in a jump saddle.  I used to jump everything that my horse would in a Western saddle.  I also accidentally jumped in a dressage saddle before I got Stinker.  Hazard of riding an ex-jumper in the stadium ring to do a dressage lesson.  Anyway, I learned several things today.

1)  I am horribly out of shape.  Seriously one circle in two point while trotting and I was huffing and puffing.  I guess I need to add in more two point and either running or swimming.  I much prefer to get my exercise riding Stinker.

2)  Two point in canter is a hell of a lot easier than at the trot.  Everything is much more balanced and I don't flop as much.  Charlie is a saint and doesn't seem to mind when I start flopping around.  I think it helps that he loves to jump.  I am pretty sure he would do anything to jump.

3)  Charlie loves the long spot and I have no concept of timing.  If I wasn't precise with my aids and left things up to him he would launch himself from the looooong spot.  Sadly this resulted in me not releasing in time.  Poor Charlie.

4)  While jumping is fun I don't find it as interesting as dressage.  This may change, but I think there is a dressage queen hiding out somewhere.  And by dressage queen I mean a totally redneck dressage queen.  I love dressage and quite frankly the thought of big jumps terrifies me.  I might be a horrible eventer but I am game for trying.

Now I leave you with a terrible picture of Stinker.  It is quite difficult to get a picture of him when all he wants to do is lick you.  How do you end up with a horse that licks??? It is so weird, but he is my little weirdo. 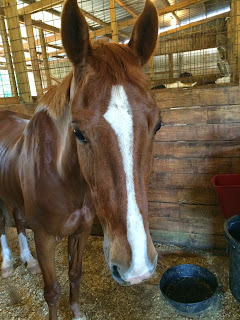 Posted by EventingSaddlebredStyle at 7:20 PM