My initial thoughts:  I thought it was a mess (as expressed above).  I did think it got better after the pee break.  And I was trying really hard to be better about releasing.

D's Thoughts:  (These are a little less precise than last time so read at your own risk)

9:49-10:17  Some of the best trot work I've seen you have on him!  The only pick is that shorter reins would have made you have a better feel of him and help control it all a smidgen more.  You are kind of like, "hey look he is stretching but my hands are still by my face"
11:12  He just gets stuck on the left side.  I would have leg yielded him left or circled 12 m OR you can try playing around with just slightly maneuvering his shoulders right and left between your reins.

14:30  Notice your arms.  What are they saying to you? (All the tension went straight to your arms and worse yet they were chickened out to the side.  If you were doing yoga you would lose your zen center with those arms.)

14:33  You were together and you gave just the right amount and at the right time!!!  Yes now we have better arms.  They are at our side and we have a flow through your body.

16:27  You widen your hands because he is stretching, but you feel no contact.  And you are like "yo where's my weight", when you are feeling that, your reins are too long.  Everything from here to the end is due to your reins being too long.  Elbows always stay at your side.  You can push your hands forward to find length in his neck.  When it is all rein, it drops him on his face.  Stretch WITHIN the contact whether it is half an inch or more than that.  When you can push your hands forward, he follows, and if you run out of arm you can maybe float a touch of rein.  But for now practice only doing it by pushing your hands forward toward his ears.  Then bring them back to your side.

When Stinker stretches, you have to think "sit back half halt with my core and slow my body down even more" because that is hard core work for him too.  Especially coming back into work.  You need to get your reins shorter and that would have solved a lot this ride.  Also, you need to change the way you let your brain speak and think to yourself.  Instead of thinking "ah ha here is an exercise to fix that!" say "hey look it's cool in this position or to move this way" (in your best stoner voice).

Next time I want to see more circles and changes of direction more often.  This way it is a "flow from here to here to here" feeling instead of the current "ooooook we trotted around the outside and whew we held it together.  Maybe we'll do something different ooooook now.  Prep and stay calm and relax."  Just typing that makes me tense.

Take home message:
I really need to work on being better at giving and half halting with my body.  I also need to play at being a chill stoner instead of the tense neurotic mess I am.

I love the way D explains things.  She is very blunt and hits the nail on the head but it is always in a fun positive way that makes me laugh.  Although apparently she has made students cry...but I always find the humor in the situation. 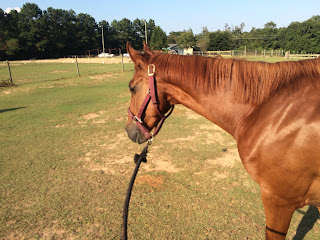 Someone got a bath and was shiny and pretty for all of 30 seconds.

Posted by EventingSaddlebredStyle at 9:50 PM