My life has been very boring so I am stealing a post from Sara at Autonomous Dressage.

Right now Stinker has a stall.  The horses stayed on a night turnout schedule all winter, so they are in during the day and out at night.  I actually really like this schedule, because it means he is in his stall for at most 9 hours per day.  The rest of the time he is out in a decent sized pasture with two other horses (it used to be three).  This also works in the summer because it gets really hot and they are inside under fans during the hottest part of the day. 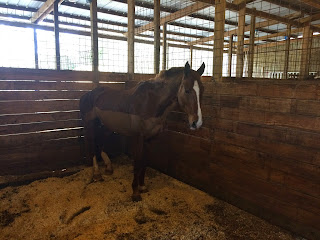 For me, the perfect situation would be a large pasture with a few buddies.  A shelter with fans for feeding and when it gets hot/cold.  Stinker likes having company.  He is very social with horse and humans and when D had him and he was only turned out by himself he was rather bummed.  Right now his partners are a quarter horse that can unlock anything and a Drum (I think) who is a giant pain.  Basically it is all the knot heads and they play and are stupid together and it is ideal.

This is where it gets tricky.  I am still experimenting what works for Stinker.  I would like to make some changes to this but I am not sure what direction to go.  Right now he is getting around six pounds of Safe Choice Senior.  This isn't my top choice but it is the only thing the barn feeds that he will eat.  Hay while he is in his stall (I usually give him some extra) and a small flake of alfalfa.  In the last month I have started supplementing this with timothy pellets.  In addition he gets a combo supplement and magnesium.  He has access to pasture, but I question how much grass he actually eats. 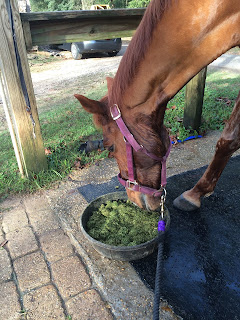 Ideally, I would have him on another feed that isn't senior (I haven't researched this yet, but I have some ideas), better quality hay, and pastures that are rotated.  I realize that this is asking a lot (and isn't reasonable in my current location), but we are playing in a perfect world where I don't have to worry about the cost.  Overall, I do think I am getting close to finding the right balance for his feed.

Stinker got a modified trace clip this past winter.  He was clipped once in October and still hasn't shed out.  Our winter is a joke (not complaining).  I think it dropped below freezing maybe five times total and that is barely below freezing.  So clipping was necessary.  I went with the modified clip because it decreased the cooling out time, but left him a fair amount of hair.  I was concerned he would drop weight over the winter and wanted to leave him with as much hair as possible without having a two hour cool out time every time I rode.  My barn blankets for no charge, which is awesome. 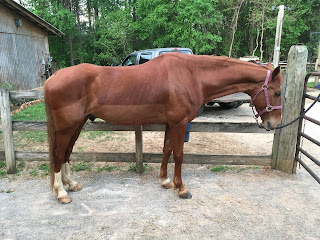 Yep all the lines are still there 6+ months later...

I feel like this was an ideal situation and I was very happy with the way it has turned out.  I will probably do something similar next winter and if I move I will reassess based on location.

I am not sure I want to talk about his feet...I am still feeling horrible about the thrush (which is well on the mend).  I honestly need to educate myself more about his feet (more beer for the farrier).  Back in January he went from being barefoot to being shod all around and this has made a huge difference in his hind.  Before I felt like I was consistently losing his hind out behind him and now it is more up under him.  I don't remember exactly how the farrier is shoeing him (he did some tweaks based on how his feet wear to keep things level).  I feel like this situation is pretty ideal and I plan on doing a post about his feet, but I need more time and information first. 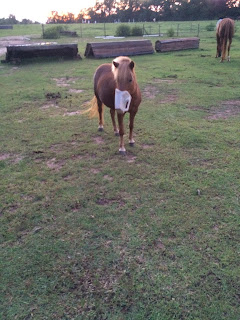 No farrier related picture, so enjoy the mini with a scoop.

I think it is well documented that Stinker loves the vet.  Actually the majority of our vet bills have been EPM related and hopefully that will not be happening again.  Basically, he gets the wormer program set up by our vet, the shots recommended by the vet, and regular dental work by the vet.  It is a pretty comprehensive setup and even my neurotic self hasn't found it to be lacking.  I absolutely love our vet.  He is very straightforward no bullshit, but doesn't go worst case scenario on you and is able to handle the owner as well as the patient.

Example, when he first diagnosed Stinker with EMP he laid out the diagnosis, treatment plan, and information on the disease.  What he did not tell me is that while Stinker was not showing strong symptoms he did not respond to treatment as expected.  Which meant that the case was actually worse than what the vet initially thought and decreased Stinker's chances of making a full recovery.  There was nothing more that we could do and if he had shared the information at the time it would not have benefited me in any way and actually would have caused me a lot of stress and anxiety (which was already high).  It was only after the fact when Stinker was well on his way to recovery that he told me how bad it was.

This is boring as hell right now, but our schedule is 30-40 minutes of walking in the ring, on the hills, or over ground poles in the stadium field three or four days a week.  Then I get the video for D's lessons and have a lesson with S on two other days.  These rides are a bit more fun because there is some trot mixed in typically plus I have someone telling me what to do so I don't have to stretch my creativity.  Depending on the week and how Stinker is feeling he gets one or two days off.

I laugh every time I hear someone complain about trot sets, because try doing all that walking.  We can't even go on the trails because he gets too anxious and I can't get the soft stretch I need for him to keep improving.  The only saving grace is the changes I have seen.  He is getting much softer and less tense.  Plus he feels way straighter and isn't freaking out about my legs as much (he wouldn't be Stinker if he didn't occasionally lose his noggin).  So while boring, I think it is quite effective.

There are some things I wish I could add in.  I wish we had more cavalettis (the barn has two) so I could mix those in there.  I also wish we were to the point where we could trot softly and we could do some trot sets on the hills.  That will happen eventually.  Also if anyone has fun exercises please let me know, because I can only walk over logs and call it XC so many times before I lose my mind of  boredom.

Saddle fit is huge.  I didn't realize just how big of a difference it would make until we went from OMG can't walk to walking for 30 minutes.  So I will never skimp on making sure I have a well fitting saddle (and a saddle fitter who I trust), because if Stinker says it doesn't fit I am going to listen to him. 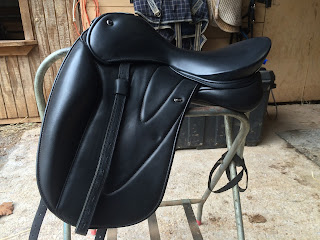 I don't have a picture of it on him, but he loves it!

He is getting a massage this coming weekend, so I will see what I think about that.  He has had one chiropractic adjustment by the vet (he was checked again and nothing seemed to be out of whack).  I really don't have any of the other extras available, otherwise I would probably give them a shot (assuming they are within my experiment budget).  And yes I have a set budget for experiments with my horse...

So there you have it.  More than you ever wanted to know about Stinker's lifestyle.  I think he has it pretty good. 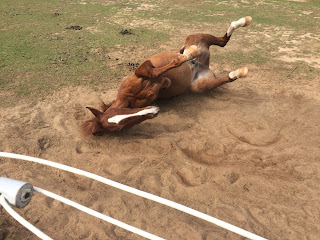 Life is rough for Stinker
Posted by EventingSaddlebredStyle at 3:00 AM