Sunday, the plan was to get home mid afternoon.  But like most well thought out plans involving horses that did not happen.  We had eight horses, Stinker was in the barn's four horse trailer that S was driving.  Then we had two two horse trailers that were being pulled by boarders (one of which had never pulled a trailer before).  Things were slow getting ready Sunday morning, but we were finally loaded and ready to pull out when I noticed we had a flat on the right rear trailer tire. 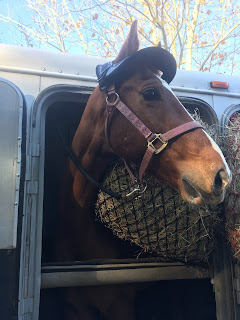 All dressed up and no where to go

I told S and she called A (our barn owner about it).  He is super handy and can fix about anything.  He said we should be fine if we put air in it.  We borrowed a portable air compressor, but the battery was going to die before we got the tire totally aired back up.  So S decided to send the other two trailers ahead and we were going to stop at a gas station and finish airing it up and then catch up.  I aired up the tire and it seemed to be holding, so we got back on the road.

At this point we were about 10 minutes behind the other two trailers.  As we were going down the interstate S felt something and thought the tire had blown.  Then a trucker pulled up along us and made some motions so we stopped at the next exit.  Of course the gas station we pulled into was closed on Sunday.  Everything was still intact on the tire, but it was flat again.  We facetimed with A and he said that it looked like the tire had been bouncing (I can't remember the actual technical term) and we found a nail that was in it. 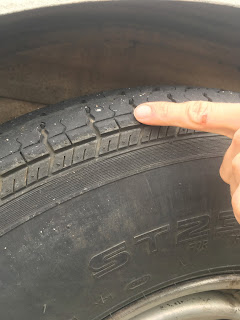 Nail to the left of the finger

S and I wanted to change the tire, but A wanted us to find a station that would put a plug in it so we still had a spare (we still had about 5 hours to go and there is a long stretch where there is nothing).  A lady was very nice and pulled in to see if we were ok.  She didn't know of any places that could plug a tire, but she did ask if we had cell phones.  I assured her we were fine and would find something and that we could change the tire if necessary.  Since there was nothing at this exit, we added more air per instructions and got back on the interstate and were limping along.  I started calling every place that I could find.

We were in the bible belt on a Sunday morning so it was hard to find a place that was close and open on Sunday.  After a couple no answers I was starting to get really nervous.  I finally got an answer but the place said they would only do semi tires.  I was desperate and asked the guy if he knew of any place and he said that Greg down the road might be able to do it.  I asked for Greg's number and said great thank you and got off the phone. 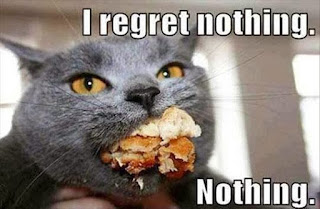 S and I were both stress eating all the snacks in the truck...

I called Greg and he seemed a little puzzled but said yes he could help us out.  I asked for directions and he said just to call back when we got to the truck stop I had originally called and he would direct us from there.  I was so excited to have found a place that I didn't really think about things until after I had hung up the phone and relayed everything to S.

Then I realized that we were probably going to some guy's backyard.  S and I decided that it was still the best option, because the tire was totally flat again and it was the closest place.  We limped along and finally made it there, but by the time we got there the tire had blown out.  I was a little nervous when we saw the place.  It was a trailer house with about 15 boats and a bunch of other junk piled around.  There wasn't really even a good flat spot for the trailer.  I told S that I would send our location to A and that I had cash to pay for the tire. 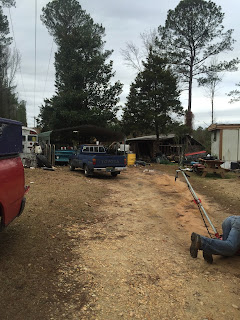 Poor A was really nervous for us (it was S, a 13 year old girl, and me).  Greg was really sweet and I was very thankful that S and I hadn't tried to change the tire ourselves.  He couldn't get the spare off the trailer because one of the bolts wouldn't come loose.  He ended up cutting it off with a torch.  He also had a hydraulic jack and one of the fancy things tire shops use for the lug nuts.  He finally got the tired changed and only charged us $20 bucks.  I was so happy that all four horses stood quietly on the trailer.  Typically Stinker starts pawing and prancing in place when we stop, not to mention that the equipment was quite loud.  He did start snorting when the guy was checking the tire pressure on the other side of the trailer but he stood like a rock.

Once we got back on the road, one of the places I had called that didn't answer called me back.  The lady had been in church and saw she had a missed call.  I thought that was very sweet.  As the day went on, the temperatures kept dropping and it started raining.  By the time we got home it was cold and pouring down the rain.  Stinker was so done and over with everything he practically drug me down the barn aisle to his stall.  There were horses in the cross ties all down the way and people pulling wraps off.  I pretty much just called watch out we are coming through and power walked to keep up with him. 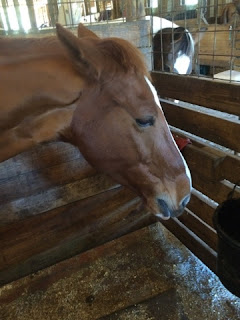 Basically sums up his feelings that evening

I got him all tucked in and my stuff unloaded (of course my tack trunk was on the bottom of the stack).  He was happily eating and kicking in his stall.  I was exhausted and loaded my stuff up in my car to take home told him what an excellent boy he was and went home and had peppermint hot chocolate for dinner.
Posted by EventingSaddlebredStyle at 1:00 AM