Awhile back Stinker went on a food strike and was tossing his feed around and wasting about half of it.  We determined that it was the supplements that were causing the problem.  I made a few changes to them and he was still refusing to eat them, so I stopped putting him in his feed and started trying to mix them into his timothy. 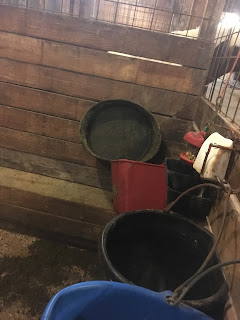 Why eat it when you can stack it?

That worked for about a week.  Then the adventures of the traveling food bucket started and he was just tossing it around and wasting more of my money.  I decided that I would just try to get him eat the joint supplement because that is the one I deemed the most important.  That worked for about three days.

I then started trying to feed it to him post ride rather than when he was in his stall.  That worked once.  I was getting desperate, so I decided to try applesauce.  After a few test runs with just applesauce to make sure that he would eat it, I started adding that to his timothy supplement mixture.  So far it has worked for two days.  I am skeptical because today he ate all around it and left the applesauce/supplement/timothy mixture for last. 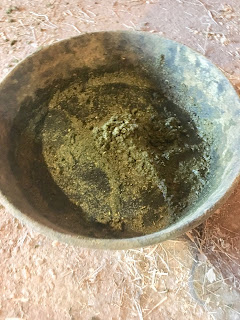 Save the best for last?

What tricks have worked for picky eaters in your life?
Posted by EventingSaddlebredStyle at 1:00 AM