Poor Stinker lost his hamster on Saturday.  It was a no good horrible rotten day for his poor little brain.  I grabbed him early because he was filthy.  It had rained and he found the one slightly muddy spot and rolled in it.  Both sides, face covered, all the way over.  Such a filthy pig. 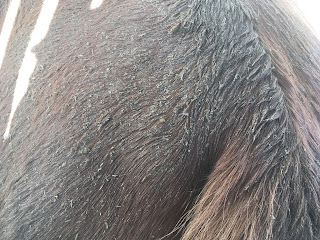 He started getting anxious in the barn and kept getting pushy and wouldn't respect my space.  I tried distracting him with hay, nope hamster was fully lost.  He finally calmed a little when Cowboy was brought in, but still almost murdered my saddle twice when I was tacking him up.  Needless to say I was rather annoyed and making threats (not that he cared).  I hoped he would settle once we started moving, but he didn't really settle until we climbed a steep hill.  Then he perked up and started acting like his normal self. 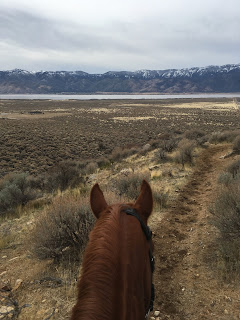 Unfortunately, on the way back down the one trail we ran into a large group (10+) of dune buggies.  Usually Stinker is better than Cowboy with dirt bikes/dune buggies/traffic, but not without his hamster.  Stinker hit the brakes and refused to go forward and felt like he was about to spin and bolt.  I decided the best option was to not press the issue and just get off.  I was rather annoyed, because the people (who were stopped and out of the dune buggies) did not even leave a path for the horses to get through.  So we had to scramble through the brush and drop off a bank to get around them. 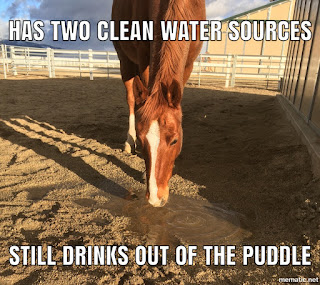 But poor Stinker was totally frazzled and I had to walk him for about another half mile before he settled enough.  He was pretty twitchy for the rest of the ride and was quite relieved to get home and turned out again.  I haven't felt his brain so out of sorts for a really long time.
Posted by EventingSaddlebredStyle at 1:00 AM