I am totally in love with having these hills for trail riding.  Last weekend I utilized them both days. On Saturday we went 9.4 miles and on Sunday we only went 5.5 miles, but both days involved lots of climbing.  It is nice to get out have the space to just go and see what we find.  I am slowly figuring out the trails, and hopefully I will be able to start building loops that have a set mileage/time. 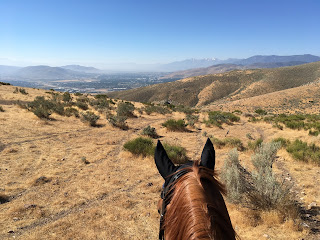 Eventually, I would like to be able to utilize this time to do some trot/canter sets, but that is a ways off.  Right now the goal is to keep him walking (slowly for him) and really using his hind to build up his hind end.  He likes to power along and pull with the front instead of pushing from behind, but he is starting to figure out how to use his hind going up the hills.  Coming down is still a bit of a challenge, especially on the rockier trails.  If he starts to slip he thinks going faster is the answer. 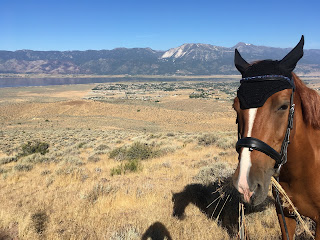 Yep he is a majestic beast

It doesn't hurt that the views are amazing no matter what direction I go.  I do have to be careful not to over do the uphill (I almost did on Sunday) and make him too sore.  I wanted to try to get up to a road and see where it went, but things just kept going up and up and up.  He told me he was done with the up.  I was hand walking him and he just stopped and said no thank you, I am tired. 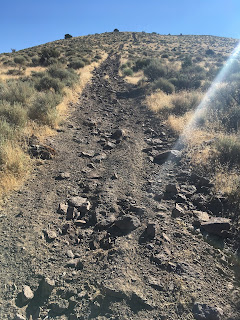 Lots and lots of up

I wish I had a way to measure how high we are climbing.  My best guess is we are easily doing 600-700 feet, but I don't have a way to confirm it.  Are there any good apps (preferably free because I am cheap unless it is tack) that measure altitude changes?  I have been using MapMyRun to measure distance and pace, and I thought it did altitude changes but I can't seem to find it (It is also quite possible that I am just unfamiliar with the layout because it has been a little bit since I actually was running). 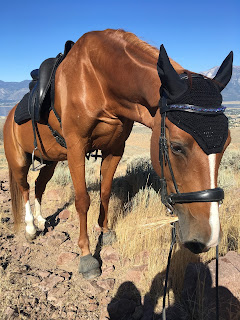 Listen lady I am done with this (for the record he is just pathetic and jigged most of way home)
Posted by EventingSaddlebredStyle at 1:00 AM