I am really sad I think my dressage saddle is getting too narrow for Stinker. I've noticed some puffiness around his withers after I ride. The only thing I can come up with is the saddle is too narrow and is putting pressure there. I'm working on getting a fitter out but they are few and far between around here. Fingers crossed that I will get something worked out.

In the meantime I didn't want to ride in the saddle as much but I also didn't want to stop riding so I decided to try him bareback. I lunged him first and decided to leave the surcingle on so I could have the draw reins still. For the most part they are loose but occasionally I use them to remind him that the left shoulder doesn't bulge out and if he puts his head in my face I will activate them. I realize some people equate them to the devil and I do not use them to put him in a false frame. But to each their own. 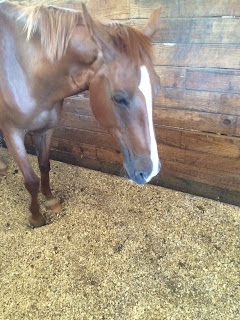 So off we went. At first he tried his normal saddlebred stuff and I was flopping all over. I think he didn't like that anymore than I did because he stopped in record time. And it was not because I was riding so effectively. Once he settled things went well. I'm still struggling at getting him to reach under himself. Everything is very short and choppy but it is being dictated by my pace so that is an improvement. By the end of the ride he was willing to stretch down in his next but that needs to come earlier and the longer steps need to happen.

I have kind of abandoned the walk for a bit since I think that will come when I get more relaxation. Right now we are still quite tense. It's not as bad as it used to be but a long ways from where it needs to be. 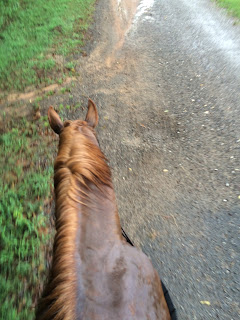 Posted by EventingSaddlebredStyle at 10:00 PM