Sit Up and Leg On

That was the mantra of the cross country portion of the clinic.  As a side note, who decides it is a good idea to do a cross country clinic when they have never ridden cross country?  That would be this ding dong.  After stadium yesterday I was feeling pretty confident.  Pongo shot that in the ass when I walked him down from the barn and he started spooking at everything.  A stand of trees that he goes through at least twice a day suddenly became horse eating monsters.  We had to be led into them (oh the shame).

The look on Nick's face was priceless when he was asking us what we had done and I responded with, "My horse is spooky today and I have never done cross country."  He already knew that Pongo is rather green from the day before.  But he took it in stride and had us start off in the trot.  I have video, and it is quite obvious that we are both quite green and there are several rider errors.  Also please excuse my blinding white shoulders.  I also have a solid farmers sunburn going on from yesterday.

After we did that set twice he had us move on to the ditch.  Pongo had never done a ditch either and he is really weird about changes in dirt.  I have seen him refuse to walk forward when the dirt changes from red to brown.  It is actually quite sad, I don't think he got out much at the racetrack.  Anyway, he refused the ditch a couple of times and Nick got another horse to lead us over.  Pongo jumped and it was ugly (mostly my riding), but we made it over.  We were led over it again and then did it on our own.  No more refusals.  Good pony.

We then did a series of combinations that included the ditch and the water (which is a little deep right now).  It rode really well, there was a cross rail coming down into the water that we glanced off of due to my riding.  I wasn't able to get him back to me quickly enough to get him straight and focused into the jump.  I knew it was going to happen, but I wasn't quick enough to fix anything.  We circled and came into it at a much better pace and it was much smoother.  My position leaves much to be desired, but I have only been jumping once a week for about three months.  I noticed on the videos that I caught him in the mouth several times.  I need to be better about getting my heels down, legs underneath me, and not get so far forward.  I think with time and practice I will get a better feel for things and I also need to work on getting my leg in a solid position.  I see two point in my future.

Next we moved onto another combination.  Pongo and I struggled with this.  All of our problems stemmed from him not being straight and from me not being quick enough to get the correction to get him straight.  In this combination, we would jump some black pipes then 4 strides (I think) to a down bank.  It was then one stride to a cross rail and two strides to a set of logs.  Going down this combination I would lose control of the shoulders over the down bank which would allow him to glance off the cross rail.  When we did it in the reverse order (logs, rail, up bank, black pipes) we were really good.  Hence our issues being a rider problem more than a horse problem.  More time will fix both of these.

Overall, I really enjoyed myself.  I loved the more "technical" challenges that require me to think and really ride.  I use the word technical loosely because I realize they aren't difficult challenges in the grand scheme of things, but for us in this moment they are.  I absolutely loved riding with Nick.  He is yet another one that is demanding but in a positive way.  It would have been very easy for someone to rip Pongo and I to shreds, but instead he focused on the basic issues and was very positive.  Pongo won a portion of my heart this weekend.  He is so willing to try for you and he is a fun ride over the jumps when he isn't Ping Ponging between the reins.  Who am I kidding, if he wasn't a bit of a challenge I wouldn't think he was as much fun. 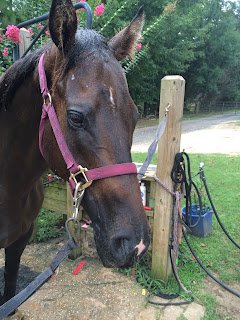 Such a cute little pony face

Posted by EventingSaddlebredStyle at 9:06 PM