Disclaimer:  The more I thought about this ride, the more frustrated/unhappy I was with it.  Bottom line is it isn't one of our better rides.

We got too quick at the beginning and I still don't have my leg or butt under me.  (This is my dressage saddle and I am really thinking it needs to go.)  I do think I kept my leg on more so that is an improvement.  I really thought I had made progress with having my leg under me and while it wasn't the worst, it still was pretty bad.

I do like that you can see the upper muscles in his neck instead of just the bulging under neck.  I really felt like I was struggling with getting give in the left shoulder, but upon watching the video I realized I am actually just losing the haunches.  (Seen at 2:17 and 11:45)  I felt like I was struggling with this shoulder through out the ride. 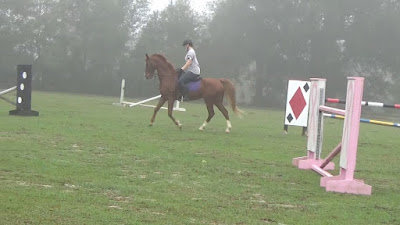 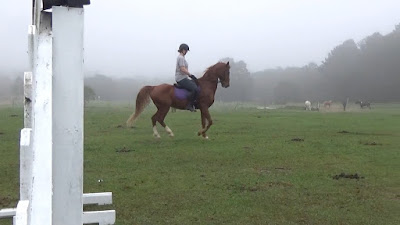 When we cantered right, I let him take a lap because I felt like he just needed to go somewhere.  He swapped the front when I was bringing him back to trot and I did not feel it.  My original plan was to do some smaller circles on the right lead, but the horses were getting fed and I did not know how long I could keep his focus.

I think I should have done the left first, because we struggled more with that.  The left was a mess, so I left it for the day and tried to end with some give.

Overall, it was an ok ride and I do think I handed things fairly well.  I was pleased he didn't lose his marbles when the horses were let in.  It wasn't our best but wasn't our worst either. 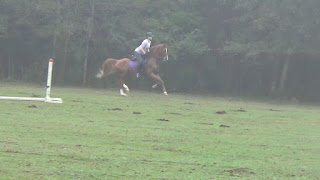 Cantering is fun (at least to the right)

1:06 When I say leg under it doesn't mean grab on harder with your knee.  You must pull back from your back leg muscles and from your hip joint.  Galant effort however.  (May I just say nail on head)
3:18  That was a nice transition before Pongo came to help. (Pongo decided I was cheating on him and needed to check things out.)
4:12  Sometime I see him get choppy now and it is because it is too small of a trot.  Let go of his face a bit.  That doesn't mean he can saddlebred his neck, but give him room up front to move into.  I am sure this will be no problem for him and will require you to remember to take air in!
5:06  Let his canter out.  (Since then we have discussed letting him canter if he decides to do it nicely and balanced vs insisting he continue to trot.)
8:42  I would have just gone with that canter because it was a nice offering (He gave a very lovely but unasked for canter transition)
11:38  Same thing
12:04  Outside half halt (Story of my life)
12:49  Get that neck to give before you ask for canter again
13:00  You can small circle to get the canter but once he picks it up get on a bigger shape or go straight.  He doesn't have the strength to load and canter and turn that much yet.
14:08  More active inside leg and outside leg further back to knock him back inside.  He threw his butt out because he had a wide open outside of his body.
14:54  More outside leg
15:22 Canter moment
15:31 Canter moment 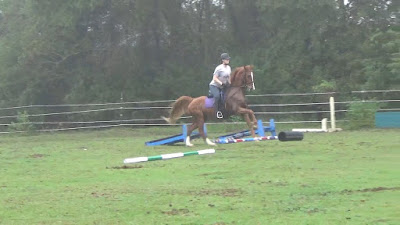 If his baby horse canter has this much jump what will big boy canter look like???

Once you got past the initial explosion that one canter set to the right was actually nice.  Yes, eventually we will work the neck down, but I am glad we got a canter session!  That is really kind of his working canter.  You can shorten it eventually but you need to ride just that before I can let you make it smaller.

Your other homework is to ride him in a bigger trot at all times.  Your little trot is now only for if he really needs to regroup otherwise out you go.  Also, work on using those legs more textbook like for the canter.  Don't let him overwhelm you into just babying the transition.  Remember if he throws himself out to the right for the left lead take his nose right and make him move left then ask for the canter. 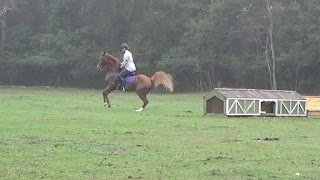 As I mentioned before the more I look/think about this ride the less I like it.  I feel that I was very infective as a rider.  Once we got things together, we did look pretty nice in the right canter.  But there were so many gaping holes.  One, I am letting him do whatever he wants with his hind.  Mainly because if I slide my leg back we shoot forwards...duh you need to fix this not ignore it and pretend you are an ostrich with your head in the sand.  Two, my position sucks.  My ass is stuck out behind me and my legs are shoved out in front of me.  I need to fix this.  When my butt is out his can get left behind and when my legs are shoved out front I am not balanced and can not fix anything.

One good thing that came out of this is I was doing the opposite of what I needed to do with the left lead.  I thought that the problem was his left shoulder, but it actually is his entire right side.  The canter to the left will be a work in progress for awhile, but hopefully we will get there.

Here is a sequence of pictures that hopefully explain the left shoulder not giving impression when the haunches are actually swinging... 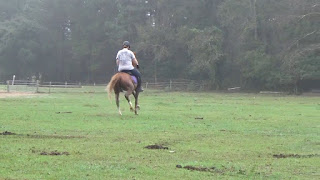 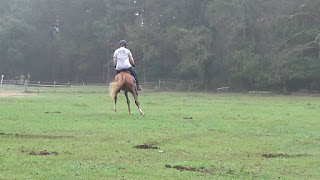 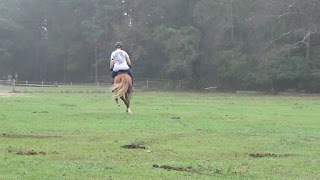 D is changing the format for my lessons, so this is going by the wayside and I am saving the new format for the next video.  There are several reasons for this.  One we are getting more consistent, so we can start working on more specific exercises.  Two, she said we need to start doing movements in the ring so we can start prepping for tests (OMG tests are on the horizon...very far horizon but that is progress).  Three, I have been a little aimless and the new format will help me with my focus.

But I do need to work on letting go of his face so he has room to make his trot bigger, getting my legs under me, and continue with the canter (take him right to get the left lead).
Posted by EventingSaddlebredStyle at 6:34 PM