I had yet another video fail.  I changed a setting in hopes of improving the focus, but it had the exact opposite effect.  Oops.  Thankfully, I had white polos on the front and Stinker has white socks on the back, so the feet are still pretty clear.

The video is short.  I didn't realize they were doing double turn out, so they brought the horses in much earlier than I anticipated.  I waited to get on because I wasn't confident I could bring him back to me when everyone else went galloping out of his pasture.  That aside, I think everything else from the list was accomplished.

Me comments:
My legs are KILLING me!!!! My conclusion about my position is I'm trying to water ski. I clutch with my hands/arms and brace with my legs.  This really needs to change, because with the arms especially I am creating tension in him which he doesn't need any help with.

General comments:
We start off pretty choppy but I think it is still an improvement and at 1:15 he starts to relax and step under more.
1:55 (one loop L2) isn't as choppy as the first one, but there is still a long way to go as far as him stepping under and really stretching.

3:26 (leg yield L1) he currently thinks me moving my leg means canter or he thinks cantering is easier than moving over. Basically nothing pretty happened in this.

4:30 this was supposed to be a lengthening but I got sloppy with my aids and he took the open door.

6:40 (leg yield R1) not apparent. I lost the left shoulder and he got crooked and there was no cross over.

7:05 (leg yield R2) we start crooked and when my attempt to straighten didn't work we circled. I have his head cranked weird and when he finally moves his haunches we left the shoulders and were really crooked.

9:00 (leg yield R4) I actually like this one. He is not crossing over but he moves off my leg we stay relatively straight and there is no OMG haunches swing every where.

10:00 this was supposed to be a lengthening but I don't really see him stepping under any more. Probably because I am posting too fast.

14:27 I am bearing down with my hands.
14:35 (canter right) I think we might have started wrong but he flipped it. It was more like a rocket launch than a transition. I think I'm gripping with my upper thigh/knee and he objects.
15:15 (canter right) this one is much better. And our down transition was much more prompt (quarter of a circle instead of the entire thing)

I do like that I am able to bring him back more easily. He needs to step under more but even that is improving. We don't get stuck nearly as much. Overall I am happy with the ride. The things that I am grumpy about are all me. Stupid legs. They lie to my brain about their location.

Our trot was stickier than it has been especially at the beginning.  D thought we evened out a bit after about three minutes.  She also busted me on leaning forward in the trot which I hadn't been doing.  Maybe because I was fussing with my leg I forgot the other half of me?  D also thought that my legs looked a bit better (I think she is being kind, but hey I will take it).

Initially, D wanted me to push for more crossover with the leg yields just to get a reaction.  But when saw the leg yield at 6:50, she realized we could get lots of reaction from the leg.  I knew going into the leg yields that I wasn't getting much over and they were staying really shallow.  My line of thought was I know he can shoot to the side and cross his legs, but it lacks control.  So I thought I would start with the control and add in the more dramatic movement when he was used to my aids.  Basically I wanted to start small and build up rather than start crazy and try to control it.

Her words of advice with the leg yields were that I am on the right track I just need to keep practicing.  They were much better than last week mostly because I was better connected to his hind legs (YAY!).  This also made him work harder which is why we appear sticky at times.

The one loops improved from last week.  Above I commented that I had his head cranked weird in multiple places, and that is because he is bracing in the right shoulder and loose in the left shoulder.  So what I need to do is be more proactive on the left side.  It is the same thing that I see in the canter. When he gets like this in the one loops, I need to either circle left or bend him left then bring him back right.  Overall, I just need to keep making him more flexible and this will help with the weird twisting.

The lengthenings were total crap (my words not D's; she is much more diplomatic).  He was stuck in his choppy trot so he had nothing to extend on really.  I need to have a better trot in order for this to happen well.  At one point, I took a break and gave him a pat, then picked up trot again.  This is the kind of trot I need to have in order to be able to lengthen.  And I really should have it all the time.

Why can't we look like this all the time?

The left canter, while less than ideal did happen.  Which is a huge improvement from last week when he would only hold it for a couple of strides.  It was even a huge improvement from Sunday when we motorcycled around everything at more of a bolt than a canter.  D was pleased that I was able to get the lead and complete the pattern (it was a little iffy on the whole pattern thing, but she didn't call me out on it).

The right lead canter got picked on a bit more.  I need to have my outside aids on more.  I admittedly was very lacking in this department.  I also, need to stop driving!  Even in two point, I was driving him forward (hence the rocket launch) and he needs more breaks than gas.  I am to start trying to lean back a bit every stride and hopefully this will get me off the gas pedal.

Overall, I am to give more forward in the trot.  I am holding back too much, so I need to give and encourage him to stretch more.  I am under strict instructions, not to dump him (she knows me too well), but to give slightly and if he takes it give some more.  If he goes into saddlebred mode, I am to take it back and repeat the process.  I just need to play more with pushing him forward into the contact and relaxing myself.

Minus my major goof with the technology, I am really proud of this ride.  He watched his pasture mates gallop off to the barn and managed to keep his marbles together and give me a decent ride.  Sure we have tension and get choppy, but we also have some nice moments.  He gave me everything that I asked for and worked his little butt off.  When I have his brain working with me instead of panicking, he tries so hard.  When he gets stressed out his brain shuts down and that gets difficult.

I really feel like we are finally developing a partnership.  I am getting better at reading him and know when to say hey buddy you are fine before he gets himself into a mental bind.  And he is learning that even when I tell him no, that it is fine we will just do it again.  Hopefully we can keep this progress up until December for the boot camp.  I am keeping my fingers crossed that he doesn't lose his marbles in a new place and I am able to keep a lid on things. 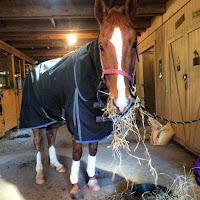 Posted by EventingSaddlebredStyle at 5:18 PM