Early last week I had a couple of terrible rides.  I was attempting to follow the walk only program and Stinker was not on board with the plan.  When we were in Florida he did two days of walk and was great.  No trying to jig, or giraffe mode.  That did not carry over to the home turf.  In hindsight, he was either tired or withdrawn in Florida.  When he first moved down here he was quiet, as he settled in he got a lot more sass.  Either way we were in full sass mode.

He wasn't ever bad, but he made it clear he was not down with walking.  We had jigging, we had inverted piaffe, we had his head in my face, and pretty much every other evasion he knows.  The first day, I didn't handle it well.  I got upset and bought into his BS.  I ended up trotting him and making him give both ways and got off.  I was pissed at myself for losing my cool.  I was pissed at him, because he wouldn't freaking walk.  I was also pissed at the world...and this pretty much summed things up (I am a little ashamed to admit it). 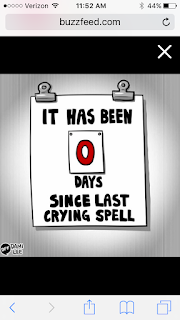 After getting the ok from the vet (and feeling ashamed for making mountains out of mole hills).  I had a regular lesson with S.  This was my first time really riding in my new saddle.  All I had previously done was walk.  And I loved it.  I can feel everything.  When he leaves his butt out behind, I can tell within the first few steps.  When he is braced I can feel it so much easier.  It is amazing how much more I could feel than in my previous saddles.

I would love to say that everything was kittens and rainbows and sunshine...But the part I am most excited about is that he let me put him together.  Before, we always kind of stumbled into it, but I actually gave him the aids and he responded and brought his butt under and pushed.  I was so proud of him.  And he even had a bit of foam at the end of the ride.

We still have a long ways to go, but he gave me the ride I needed.  I am paranoid that I am going to hurt him due to my ignorance when it comes to performance horses.  What I was told, while I was in Florida, played directly into these fears.  I am so thankful that I have people like D and S to bounce things off of and I am pretty sure they should get a bonus for putting up with my crazy. 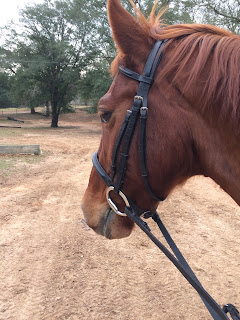