Remember back in October when I said I ordered a new jump saddle...It arrived at the end of January and it is amazing.  I love it, end of story.  But nothing can be that simple when Stinker is involved. 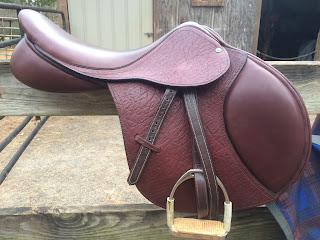 My first ride in it was a total disaster to say the least.  He was totally frantic.  I couldn't get him to halt much less walk or get anything productive done.  I panicked and promptly sent a very panicked message to the saddle fitter.  She told me to breathe and that she couldn't do anything until she came down to evaluate it.  I tried it again in a lesson with S and it was slightly better, it was still ugly. 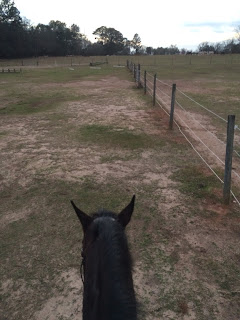 The saddle fitter was down this weekend and I tried Stinker in it again.  I was honestly expecting the worst, and Stinker was remarkably better.  It wasn't perfect, but he was willing to walk.  He doesn't offer the stretch and lacks a half halt in the trot, but it wasn't a total disaster.

Here is my dilemma, I can still return the saddle and just be out the shipping charges (not a big deal) or I can keep the saddle and hope he continues to improve in it.  Because I am me, I have made a pro con list of keeping or returning the saddle. 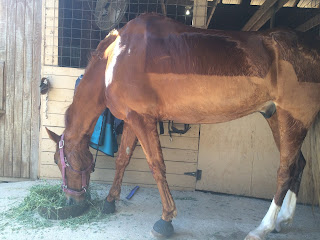 Reasons to keep the saddle:
- His current dislike is most likely a training thing (the more forward position and shorter stirrup vs the straighter position and longer leg)
- I will have a jump saddle that fits Stinker
- I love the saddle and it puts me in a fantastic position
- I can continue to use the jump saddle on Pongo (I have an older Stubben that fits him and works for me)
- It is already paid for.

Reasons to return the saddle:
- I don't know when/if Stinker will be physically strong enough to jump
- I don't know if Stinker will be fun to jump (I like jumping Pongo, but I also know my enjoyment of jumping will be very horse dependent.  I am very aware of my mortality and have no desire to have a major accident by trying to jump something that is outside of my skill set.)
- If we get to the point where we can start jumping, I can always purchase the saddle again.  S has the same saddle, so I can borrow that one in the beginning.
- It is a very expensive chunk of leather to have sitting around without the guarantee of ever using it.

So any input on the keep vs. return would be appreciated.

To Keep Or To Go?
Posted by EventingSaddlebredStyle at 8:56 AM