I think I have stared at these pictures too much, because I am starting to question what I see.  All of the pictures on top are from the beginning of January.  The ones on the bottom are the pictures taken February 9th. 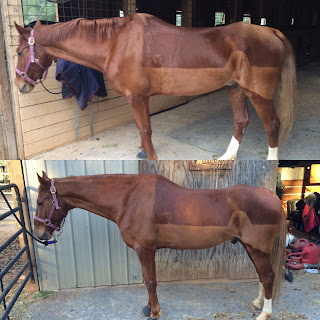 I think I am seeing a change in his neck.  He is starting lose the bulging under neck and it looks like it is starting to fill in up higher.  There is still a dip in front of the withers that needs to be filled, but that won't happen until I get his hind end lined out.  I also think that his butt is starting to fill out and he might be building up his top line.  The top line is super subtle and might just exist in my dreams. 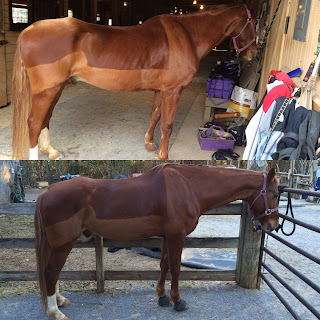 This side is pretty similar to the other side.  His neck wasn't a large on this side to start with and it is hard to see with the angle.  I am also not sure what is up with the bottom picture.  I really thought he was standing level, so I either took the picture crooked (quite likely) or he wasn't actually on level ground like I thought. 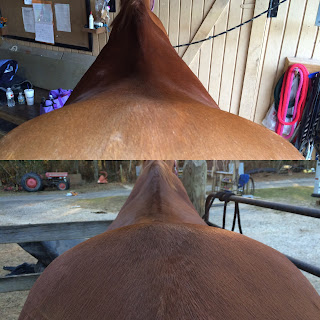 I am making myself crazy with this one, because he almost looks narrower.  I think that is a product of angle, lighting, and distance.  He still looks uneven, but I don't think I will be able to address that until I A) get him to accept my leg and B) address some of his crookedness before there will be any changes in that.  My goal is to not let it get worse, before I have the tools to fix it.

I was actually really pleased with the differences in the pictures.  I am really happy that I started doing this, so thank you blogger land for the idea (I stole it from Emma who had stolen it from someone else that I can't currently remember who.  Sorry.)
Posted by EventingSaddlebredStyle at 5:00 AM