Per usual work took over life and blogging didn't happen as planned.  Last week I spent the first night of my far too long road trip with Leah.  She was very kind to accept my "hey I could totally crash at your place" self invite and upgrade it from the couch to the spare room.  And to make things better, she even invited Kaity to come over while we played with Dramatic Spanish Mare #1. 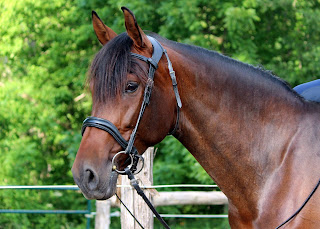 Dramatic Spanish Mare #1 aka Ruby was such a trooper.  I no longer know how to press a go button and there was a lot of go whoa go whoa by total accident in the beginning.  I am so used to Stinker that I automatically ask for slower with my seat and my half halts were far too strong since Ruby was happy to oblige requests to slow down.

I was rather ashamed of my riding, but Leah still let me on the baby later so it must not have looked as horrendous as it felt.  Ruby is pretty darn awesome and has so much swing to her back.  I had a moment of ohhhh this is what they are talking about with swing in the horse's back.  I wish I could have ridden Ruby longer, but I didn't want to steal all the fun from Kaity. 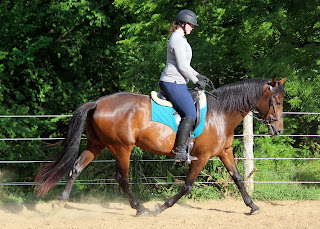 I did have to laugh, Leah's hubby came along to the barn and decided he liked me because I brought logic into her musings about buying a helmet in Europe (I suggested that she try one on prior to buying from Europe).  Poor poor poor hubby has no idea how many purchases have been caused by me.  Neither Leah nor I felt the need to correct him (tack ho for life).

I had a fabulous time with Leah, Kaity, and Ruby.  I was bummed that I didn't get to meet Leo, but I was short on time and I know there is no such thing as a quick trip to a barn.  But I did enjoy getting to see Leah's place.  FYI it is way more adorable than she lets on, but it is allllll teal.  I should have taken pictures, but I was too busy squealing over adorable spanish mares.
Posted by EventingSaddlebredStyle at 1:00 AM