I managed to get out of dodge before the tropical storm really created a mess, but I believe that we have had around 10 inches of rain.  Loading my car in between down pours was tons of fun, but I managed to get everything crammed in and was off to invade Leah's place. 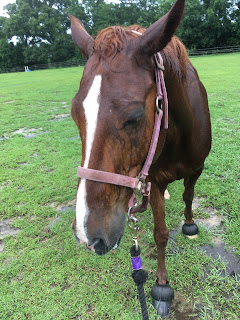 Sad wet pony when I left

The first hour of driving was mostly a heavy downpour and at a whopping 45 mph.  After that I only hit a few showers and it was smooth sailing.  The stretch from Memphis to Saint Louis drug on forever.  Probably because I was trying to beat rush hour traffic and I really really really wanted to see the dramatic Spanish mares. 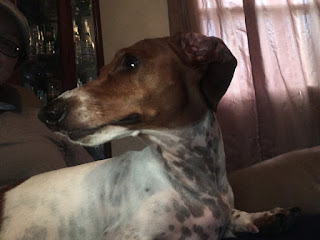 I arrived safe and sound around 5 and we immediately went to the barn.  Cinna has the cutest face (of course I forgot to take a picture).  Teal presents were given, ponies were ridden, weiners were played with, and pictures were taken, but I don't have them yet so it will have to wait for another day.
Posted by EventingSaddlebredStyle at 1:00 AM