In all of these pictures he is standing on level ground and I tried to take them from a similar angle.  Keep in mind my pictures are not the best because I don't have a lot of patience for taking pictures and someone *ahem* Stinker lacks patience at standing still and reasonably square. 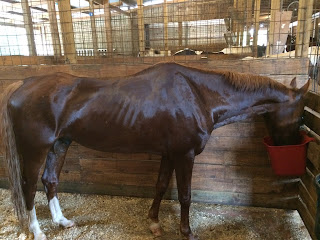 May 2015: I knew something was wrong but didn't get a diagnosis/treatment plan for almost another month.  I stopped taking pictures after this point because it was not rock bottom and he continued to look like shit. 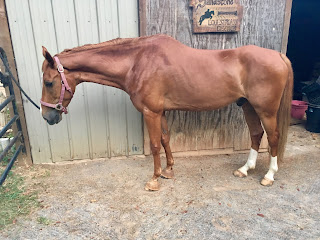 July 2016:  We had been on the walk program since the beginning of the year and he was starting to settle down a bit. 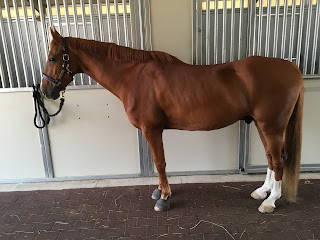 September 2017:  He was really settling in after the move and had started gaining weight with all the hay he wanted.  We had been taking lessons with trainer for about two months. 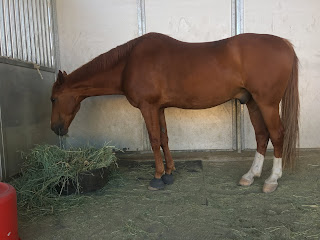 July 2018:  We've been here for a year and I had three separate people on different occasions tell me he wasn't as dropped in his pasterns.  I didn't believe it really until I put these photos together.

I am totally amazed at how much he has changed and recovered.  I still feel like there is a long ways to go, because he would prefer to prance around like a giraffe (side effect of having your neck and withers tie in mid back?).  But it is nice to be able to remind myself that yes we have made a ton of progress even if it feels like we are light years behind the curve (maybe because we started way way way back there).
Posted by EventingSaddlebredStyle at 3:00 AM