Stinker and I set out on an adventure.  After my misadventure last fall with following the endurance ride I decided I wasn't going to do that loop again (white line on the map).  But there is a lot of country in that area I haven't covered yet.  So after stalking google maps satellite images and putting together what I knew from both ends of my loop that I had covered I came up with a plan (blue line). 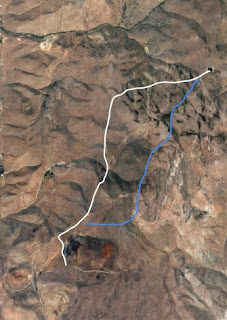 I honestly wasn't sure how far it was going to be or how big of a climb it would be, but Stinker is in pretty good shape and I could putz along on some of the steeper climbs to give him a breather.  Although he gets very frustrated with my omg can't breathe I'm dying pace.  He will put his head on my back and push.  I really should figure out how to tail him. 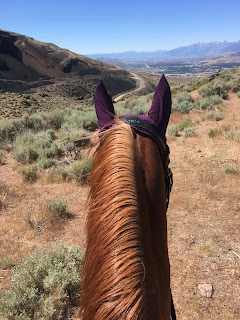 It ended up being a really pretty ride and we could see quite a ways in all directions.  Stinker got a little tired on the second climb (the first is cut off the map), but it is a pretty long and steady climb no matter how you slice it.  Essentially all of the climbing is in the beginning and it was about 2,300 feet. 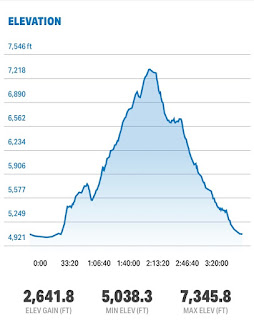 It took us about 4 hours to go just over 15 miles (mostly because I am too much of a chicken to let him trot).  I keep telling myself that we can start adding in some trotting, but the paranoia is still too strong.  I try to remind myself that he is a healthy horse now, but I still treat him with kid gloves and I am really over protective about his legs and the wear they get. 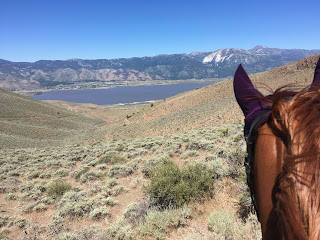 There was lots of sign of the wild horses, but none of it was fresh so I think they hang in the area a lot in the spring time, but as the water sources dry up they drift into other areas.  I am still pretty leery and prefer not to get up close and personal with them. 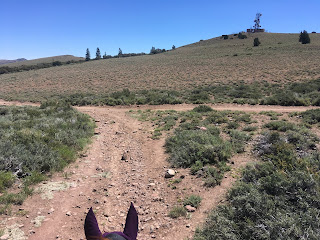 By the time we got home I was very much omg so hot and tired.  Stinker was not the least bit tired.  He got hosed off and then I turned him loose.  He immediately rolled, tanked up on water, and then started chasing Cowboy around.  After he got bored with Cowboy, he dug into the hay and looked quite happy.
Posted by EventingSaddlebredStyle at 3:00 AM