I decided earlier in the week that I was going on a trail ride on the 4th. Poor Stinker wasn’t nearly as excited as me. In fact my excitement made him quite skeptical. But I gleefully strapped on my camelback and tacked him up. He was pretty reluctant and tense to start but after a couple of miles he settled into his normal stride. 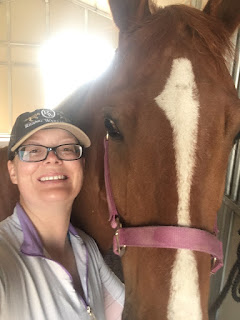 I have been wanting to try a new road but I wasn’t sure how long my adventure would take me so I had been hesitant to try it when I had a deadline. Once we were four miles in we hit a long steady climb and he was huffing so I started walking. Pretty soon I was huffing and he was trying to hustle me along. But I made it to the top. 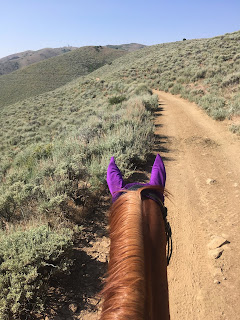 I double checked google maps satellite to make sure I was on the correct road (there were four options to take and two were in the direction I knew I wanted to go) and off we went. After a ways we popped around a corner and there was a water control pond and storage tank. I was quite surprised by that but the biggest surprise was a little further on. 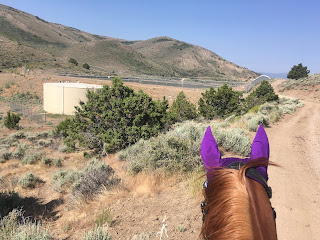 The wind had picked up because I was on top of the hills but I periodically thought I could hear faint livestock calling. Sure enough once I got around to the other side there was a massive herd of sheep. They were mostly past but I waited for about 10 minutes for all the stragglers to get caught up. I needed to cross their path and I wasn’t going to be the asshole that scattered sheep by trying to ride through them. 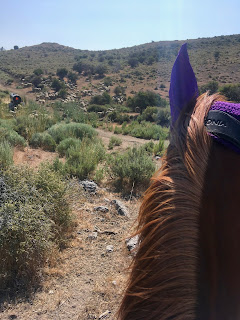 Poor Stinker was convinced that he was going to be murdered by them. Granted they were making a lot of noise and kept popping out from behind bushes. I mostly laughed and teased him that he was going to suffer from a death by lambs. I kept thinking that I would see a herder or dogs or something but I never saw anyone/anything with them. Eventually we got a break and I cut across. 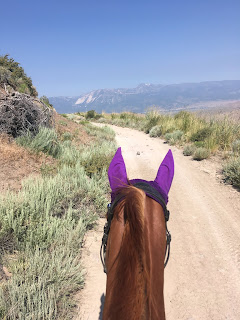 After that he realized that he was headed home and got super excited. I tried a new way to get down off the hill but it was pretty rough and I don’t think we will take it again. We did a little over 10 miles and he wasn’t even tired. In fact he was so excited about going home that he earned a few minutes in the ring. He gave me some very nice trot work and the canter was excellent. The trail ride had taken the edge off enough he wasn’t pulling as much as usual and I was able to maintain a softer contact and steadier rhythm. 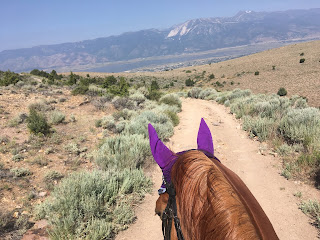 When I hosed him off I discovered that both hind shoes were loose. Thankfully my farrier said he would come out this morning. Hopefully they will still be on since we can actually hear fireworks. The county I’m in doesn’t allow them but unfortunately the sound is carrying over from the next county and it sounds like a professional show.
Posted by EventingSaddlebredStyle at 3:00 AM