Poor Stinker has been getting tormented lately.  I have been splitting my lessons with S, so I ride the first half then she rides the second half.  I want him to be well schooled enough that other people besides me can ride him without him deciding the world is going to end. 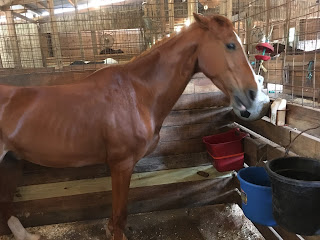 Someone had his bitch face on

I was actually surprised the first lesson, because he was really relaxed and going really well.  But when S got on him he got really anxious.  He has been so much more relaxed with me I thought it was going to carry over more than it did.  Especially since S is a better rider than me and she is also very soft and balanced.  He wasn't bad, just a little bouncier and carried more tension. 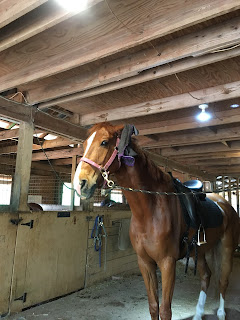 Maybe because I do things like laugh and take pictures
instead of saving him from the bonnet.


The second time, I was pleasantly surprised.  We had gotten a bunch of rain, so the dressage ring was sloppy and I decided to go to the stadium field instead (Stinker doesn't like wet footing.  I think it is harder for his hind end).  I haven't ridden him up there a ton because I tend to stick to the hills when I have him out of the ring and that pasture is flatter.  I was expecting him to be more nervous, but he settled nicely and we even did some trot work. 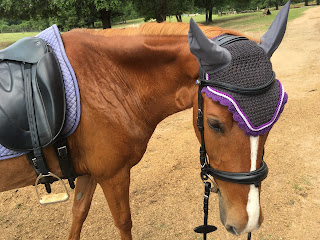 It has gotten freaking hot.  This is from 20 min of mostly walking.

That may sound a little silly but it was our first trot work out of the ring since the start of the new program in January.  I was really pleased with him because it was basically the same as it has been in the ring.  Yay for progress!!  I played with him over poles a bit and damn he gets a big lofty trot over the poles.  He doesn't have the strength to maintain it yet, but I need to get my act together so I can ride me horse. 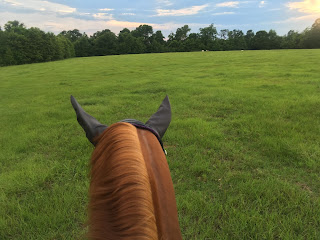 He is getting to be so much better on trail rides!

He was really good for S when she got on him.  He was anxious, but very willing and was trying despite having, "OMG this is different" written all over his face.  Hopefully, I can get him used to S and get him started on understanding that other people can ride him and the world isn't going to come crashing down.
Posted by EventingSaddlebredStyle at 3:00 AM