Well this was supposed to be published on Monday, but someone forgot that they hadn't actually scheduled the post.  By the time I realized it, I was so swamped in work that I didn't have a chance to get it fixed.  I also *might* have had a temper tantrum tonight about how I was going to go work at Starbucks because I would get an employee discount and not be working 14 hour days...but such is life.

Meet Percy my latest naughty lesson pony victim.  I call him Mr. Apple Bottoms because he has a very solid badonkadonk and feathers that can pass for boots with the fur.  Ok I am done with the bad jokes for at least two sentences (including this one). 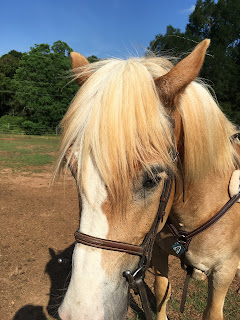 He was actually quite good for being on the naughty list.  He was very willing even when he was tired.  He was on the naughty list because he got a bit sassy when a couple of people were trying to ride him behind the barn.  It might have been because they were smaller or because it was feeding time, either way he wasn't bad with me.

The most humorous part of the lesson was when I used the mounting block to get on him.  We have an extra high block and I am pretty sure my stirrup was below the top step.  #tallpeopleproblems  It took me awhile to get used to his gait.  He has a lot more wiggle behind than Stinker does.  Overall Percy is a fun little ride (my hips regretted it later tho). 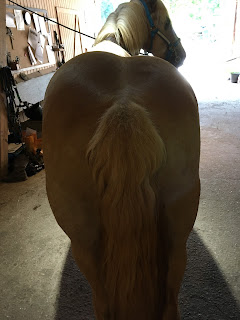 I didn't even try to canter him because he has been a pasture puff and we are working on getting him in shape.  I think he was wondering what he had done to deserve being stuck with me by the end.  We walked and trotted to get him moving off my leg (he took a lot of leg).  I am not convinced anyone had ever tried to maneuver his haunches and shoulders separately before, but he picked up fairly quickly.  He wasn't stretching down quite as much as I wanted but I was giving him a lot to process all at once.

We did some trot poles and dang that pony can get some suspension.  If he gets in shape and will work like that consistently he will kill it with the lesson kids at the show.  I was giggling the whole time we were doing trot poles. 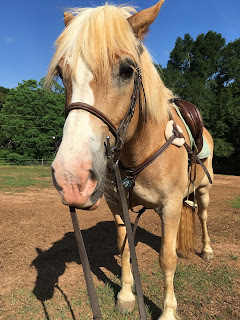 What did I do to deserve this?

Then we moved on to some small jumps.  It has been over a month since I jumped and I think it has been closer to two months.  The first thing we did was a small grid so I could work on keeping him straight.  And work I did.  He ummm has a bit of a left drift, but is quite honest.  So we looked quite drunk but made it through.  We did the grid a few times until he was getting the hang of it then moved onto a small course.

The small course actually rode much better than I anticipated.  He was quite responsive and even when he was getting tired he was still game.  I was really impressed with him and secretly hoped he keeps being naughty so I can play with him some more. 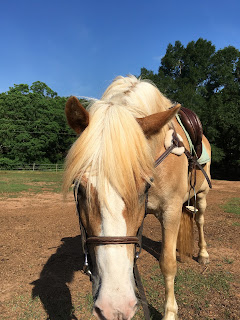 Just stop already
Posted by EventingSaddlebredStyle at 3:00 AM