No Stirrups and Jerk Level

We have been getting slammed with rain, I have been just been walking Stinker on the hills the last couple of days.  Since he is getting more consistent, I have been able to play with my position more.  Lately I have noticed that my one knee has started hurting, since I haven't had any problems with them before I think I am bracing somewhere.  I haven't been able to figure out what I am doing, so I decided to drop my stirrups and really work on getting my hips stretching. 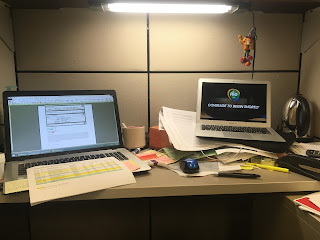 Guess who hasn't gotten any actual work done this week...

Today I finally noticed a difference.  After about 30 minutes of walking, I decided to pick up my stirrups and they felt way too short.  I am hoping that if I do no stirrups every day I am walking on the hills that I will actually get him hips to work properly and maybe I will be able to lengthen my stirrups.

In other news I discovered my horse has been being a jerk to the farrier.  I was so ashamed and I am not really sure what to do about it.  He first got shoes on in January, and I was there for that.  He was a little nervous, but I thought it was just because he hadn't been done before (to my knowledge) and our farrier hot shoes, which can be a bit scary. 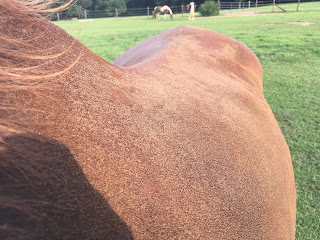 Can we say filthy monster?

Since that point Stinker has been on a five week schedule and I haven't been there for any of them until this week.  I actually arrived at the barn right as Stinker was being pulled out of his stall, so I held him.  He was really good (in my opinion), all he did was look when the farrier was grinding the shoes.  After Stinker was back in his stall the farrier said that his jerk level had dropped.

Wait, what, his jerk level?  Apparently he is nervous and dances around and tries to nip.  I had no idea on any of this, because no one had said anything to me.  The farrier said that he could tell I had been working with him (I really haven't), so I don't know if Stinker was better because I was holding him or if he is really getting better. 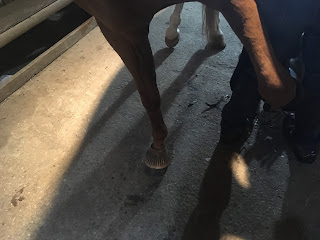 Maybe the farrier hates him because he rests a foot?  WTF horse

I am trying to decide what to do.  It really isn't feasible for me to be there every time his feet get done.  Our farrier is also a firefighter, so his schedule has to revolve around the fire house and the special training he does for the rescue teams he is on.  Between our schedules we typically only overlap by him leaving as I arrive.  My other option is to keep supplying him with beer so he likes me more than he dislikes my horse.
Posted by EventingSaddlebredStyle at 1:00 AM