That Went Swimmingly (And Contest Results)

We have been getting a crap ton of rain lately, Saturday it didn't rain despite the prediction for rain.  Sunday, there was a 20% chance (basically what every day is here) and the dressage ring was dry enough that I thought I could maybe attempt some canter for my video. 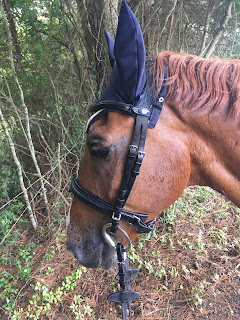 Sulking in the rain

I got tacked up and was just getting ready to set up my camera when it started sprinkling.  I decided to wait it out since it was still sunny and while there were a few clouds, I thought it would pass quickly.  Silly me.  It kept raining and I was starting to get nervous about the electronics that weren't waterproof, so I moved over to the tree line.  It then proceeded to rain harder, but the ring was still dry enough.  It stopped, and while Stinker was less than thrilled, I was still determined to get the video. 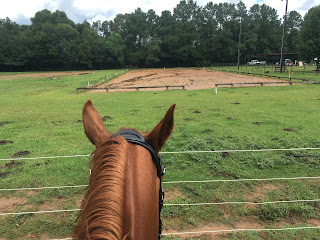 I started to set things up again and then it started raining yet again.  This time it was harder, so I booked it back to the tree line.  By the time it stopped the second time, I was soaked and had my fingers crossed for my electronics (they were fine) and Stinker was pissed.  The ring was flooded, so getting a video wasn't happening.  I decided to go back to the barn.  I was in my tall boots, so I was ducking puddles.  Then the zipper blew out on my one boot.  At this point I was just grumpy. 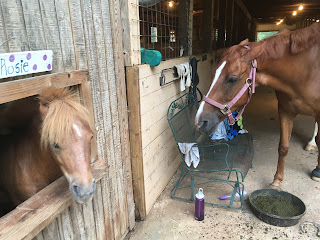 Pretty much how I felt

I got back to the barn, and dried off my saddle as best I could.  I had to go to work in the afternoon and I checked the radar and there was nothing, so I decided to suck it up and go ride.  Everything was wet and I figured we wouldn't get another shower.  I figured wrong.  About half way through my ride it started down pouring yet again.  I parked Stinker under a tree and tried not to sulk too much.  Stinker was so over things at this point. 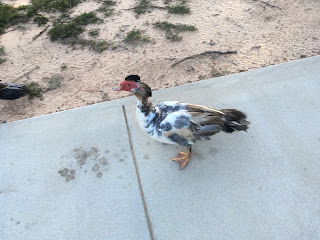 A fun duck that lives by my work

After it stopped raining yet again, I wanted to do just a little bit to get Stinker's head back in the game.  Unfortunately, he was done playing.  He wouldn't walk, I finally took him into the water complex thinking that it would make him walk.  That planned failed, but we got some awesome trot work.  Then, he trotted some hills, and finally I got his brain back enough that I could at least communicate that I wanted him to walk.  It was still over tempo, but I settled and let him be done.

How to end up totally drenched with an angry pony

Now, on to the contest results.  The dressage made things way more interesting than the eventing did. Kudos to Kaity and Leah for getting all three medals correct! 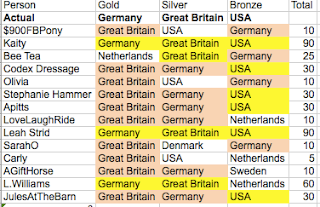 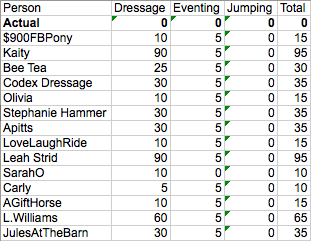 Totals for Dressage and Eventing