New Year In The South

The new year rolled in with thunderstorms and lots of rain and of course humidity.  It wouldn't be the South without the humidity.  There was a small get together at the barn for New Year's Eve, which I attended and left at ten because I am old and lame.  It was pouring down the rain, but we did what any good rednecks would do and shot fireworks off the front porch.  Only a few hit the window.  Of course I tried to die because asthma+smoke=dead me. 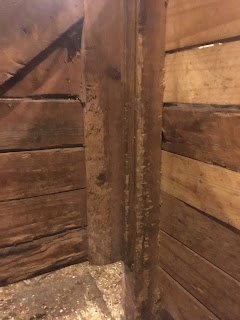 Yesterday, I got out to the barn early, because I was worried about Stinker.  He handled the fireworks on the 4th of July and the fireworks that were going off while I was riding him just fine, but when he was in his stall he was not handling them well.  I think that being trapped was just too much for him to handle.  He had churned his shavings to nothing, he was sweaty, and here were new marks on his stall door from him pawing at it by 8 pm the night before. 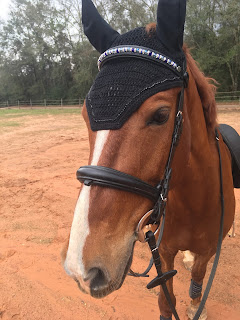 Good thing he is cute

He was still pretty wound up, but I cleaned his stall and tried to get him to eat more hay.  Luckily, it stopped raining so they got to go out.  I even managed to sneak in a New Year's Day ride which was nice.  I think he had partied too hard the night before, because he was actually dozing in the cross ties.  I have only seen him this sleepy when he was sedated.  Of course by late afternoon it started raining again and is supposed to rain all day today.  Between Saturday and Sunday we have gotten almost six inches. 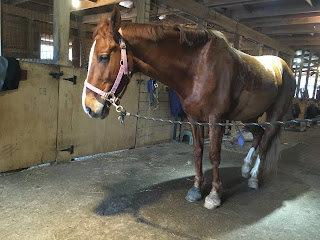 So sleepy
Posted by EventingSaddlebredStyle at 1:00 AM