On Sunday I got the bright idea to follow the endurance trail and finally be able to make the loop that I have been wanting to make.  Based on my best guess I figured that it would be around 12 miles and that I had been on everything except about 4 miles or so.  I knew the section of the trail I hadn't done was a road, so I thought everything was going to be awesome. 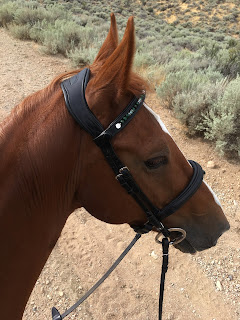 It was a great ride to start off with.  Stinker was trucking right along, I got up high enough that I could see the downtown area and it was really pretty.  The weather was perfect and the climbs up hadn't been too bad.  There was a long one that I had walked because I was feeling guilty for being chubby.  Then I got to a steep drop with a steep climb on the other side. 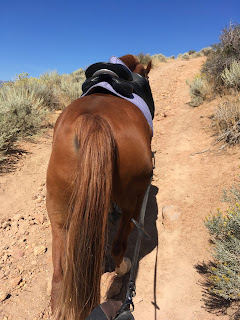 Going for a walk

I thought about just turning back, but we were well over half way and I convinced myself that since the 100 milers did it and then still went another 60 miles we could walk down and up the thing.  We walked down the steep side and then were looking back up.  It was even steeper than I thought plus there was a lot of slick rock.  My heart sank a little but I was committed at that point. 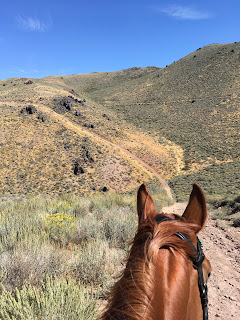 Does not do the steepness justice

So we started scrambling up it.  I was wheezing along (apparently asthma doesn't like steep climbs) and Stinker was getting impatient with my pace.  Luckily there were spots that he could stop and I wasn't worried about him slipping on the rocks.  On the steepest and rockiest part he came shooting past me and I tossed the reins over his neck and let him go.  He powered up to a good stopping place then turned around and looked at me like "get your ass moving woman."  We I finally made it up the hill. 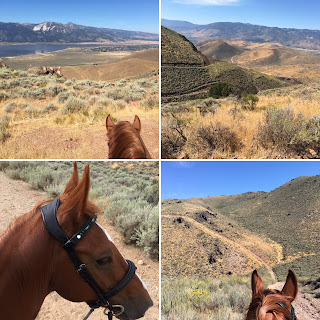 After that it was pretty smooth sailing (I am pretending like I don't have a crap ton of blisters).  I actually came down off the trail in a slightly different place than I thought I was.  I started to go the wrong way, but Stinker quickly corrected me.  Apparently he has learned the trails better than me.  My conclusion is my horse is a rockstar and I am not tough enough to do 100 miles.  Probably not even a 50, but I do think an LD would be fun at some point.
Posted by EventingSaddlebredStyle at 1:00 AM