I was not confident going into the lesson, but I was determined to set us up for success as best I could.  That included Stinker getting a full on bath and having a fabulous outfit so at least we looked good if things crashed and burned (ok we are past the crash and burn stage, but having a good outfit makes me feel better about things).  I got there extra early so I had plenty of time to fiddle around when tacking up.  He does better when I don't rush things.  And then I still had plenty of time to pop him on the lunge. 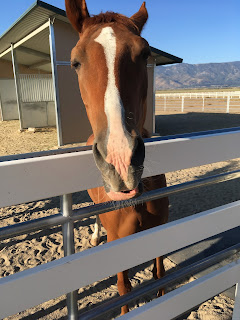 Not trouble at all

Luckily for me new trainer was riding another horse and she actually watched him go on the lunge.  His gaits are much better without a rider so it was nice she got to see him go and get a better idea of what we are working towards.  Plus she got to see him canter.  Then while she untacked I hopped on and started warming him up.  It was really hot so I was walking and halting in the shade a lot.  And yes by really hot I mean it was in the 90s and I have become a baby about the heat since I moved. 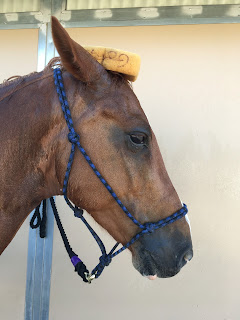 He was so grumpy about getting his face washed

Once trainer came back out, she promptly put us to work on the theme of the lesson.  Lower the neck and slow the feet down.  One really bad habit I have is letting my reins get too long and losing the connection.  Then he pops his head up and I immediately start riding backwards which makes him invert more.  But when I keep a nice steady consistent contact and maintain a balance connection he lowers and stretches.  This gives him room to actually step up behind and start lifting his back. 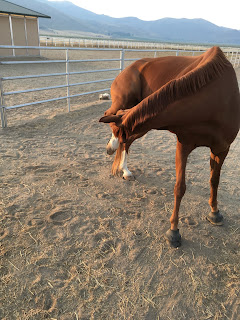 The slowing of the feet make him use his hind end more, instead of the quick choppy with minimal push I typically get from behind.  We really worked on using small circles (10 m) to get him stepping up and under while I slowed the rhythm and gave him time to lift and push.  She also had me continually repeat the exact same patten over and over again, so he could recognize the repetitiveness and start to anticipate.  I was a little skeptical of this at first, but he responded well so I am going to implement it in my rides at home. 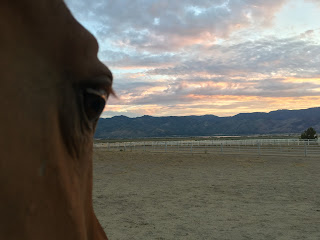 She also had me use some shoulder fore to break up the tension and guide him to step under himself more.  Once she saw it, she realized I was already using it frequently and really liked my timing with it.  It was nice to not feel like a total chump when it came to my riding (not that she makes me feel like that, I do that on my own which is why I need a nice instructor). 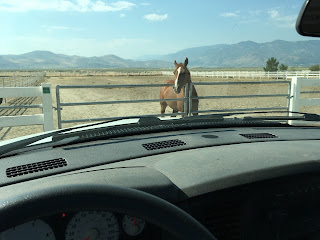 Judging my attempts at backing the trailer

I was the most excited about the trot.  We did the exact same exercises in the same places and at one point he actually got a few strides of a real trot.  Most of what we have been working on is a vastly under powered baby trot, because that is the only way to slow his feet down enough to get him working correctly.  But for a few strides he really pushed from behind and lifted and had an actual trot.  It felt amazing, and I was really bummed that I had forgotten my camera. 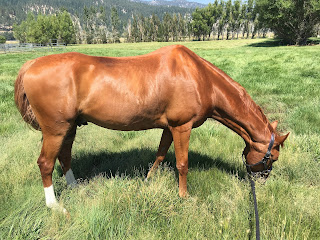 Grass for the good boy

Overall, I was really pleased with the lesson.  Despite our less than stellar rides at home he came out and played.  Whatever was going on wasn't present at the lesson and we were able to make forward progress.  The little glimmer of the future trot made me so happy.  I am finally getting to where he has enough strength to really start digging into the dressage and building more.  Hopefully, he continues to get stronger and build more muscle and we can get more consistent.
Posted by EventingSaddlebredStyle at 1:00 AM