Poor Pongo has been very neglected lately.  Between work and the lack of daylight I have been lacking in time/energy to ride/work two horses, and Pongo has been losing out.  I don't think he minds too much, because he is quite chunky and very sassy. 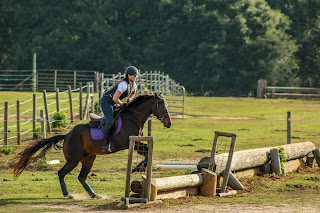 Right now I have dibs on Mondays, Tuesdays, and Wednesdays.  Unfortunately, I have pretty much only been able to ride him Tuesdays.  And that is mainly because I use him for a jump lesson on Tuesdays.

Typically, I regret my decision not to ride him on Monday, because I have to remind him that yes he does have to be soft and supple, yes he does have to respond to my leg, and finally yes when I give him a half halt, he had damn well better half halt.  This past week I got smart and rode with a dressage whip, which made the warm up process much faster.  I was a little nervous about how I would manage the longer whip when jumping, but it was fine despite the fact I typically try to use my arms to fly over the jumps... 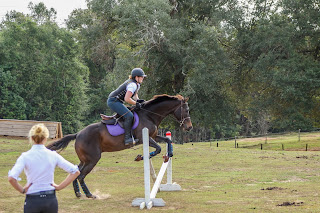 None of our rides have been fantastics, but that is mostly due to the fact that I am only riding him once a week and we always jump.  He is lazy at first, then he realizes he is jumping and perks up.  And by perk up I mean he tries to say I got this and I don't need to listen to you.  Then he gets tired and I get tired.  These lessons highlight how out of shape I am, but I am working on fixing that.

I am pleased with where he is at, because honestly he is still rather green.  I have given him the most consistent work since he came off the track.  And honestly I am quite firmly in the amateur/green rider group.  I had never jumped before May (not counting when I was a kid and would try to get my cow horse to jump logs and ditches).  I think he will make a fantastic horse, because he has a good brain and is willing. 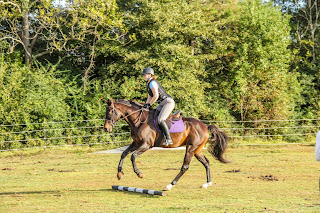 I don't have any new pictures, so enjoy all of the old ones that I have probably used a million times.  But that is what Pongo and I have been up to.  It isn't a lot, but I think it highlights that even without consistent work he truly knows what I taught him over the last few months. 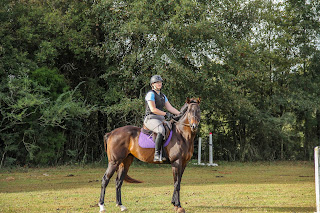