Unfortunately Stinker does not have one, but I have been working really hard to give Stinker a big butt.  I feel like something is missing from my routine.  As a review, he has poor hind end conformation, EPM basically removed all muscle from his hind (that might be a smidge dramatic but that is what it felt like), and I am still figuring out how to ride him correctly. 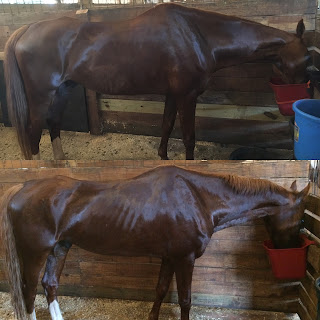 As you can see from the picture, I have made progress not only with his weight, but also with his muscling.  He looked like shit last year after he lost weight and muscle from the EPM.  I am concerned about how he has a dip in his butt.  I have read that this goes along with a weak stifle (which also goes along with what my vet has said). 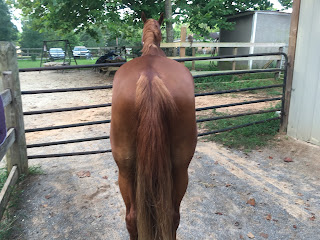 I don't have an old butt shot to compare it too, but you can see how flat his bum is on the sides.  The right is worse than the left, which correlates with his right hind being weaker than his left hind.  I have been doing all the things I know to strengthen them, but I am not making the progress that I want.  I could just be being impatient (no surprise there...I want muscle NOW!) 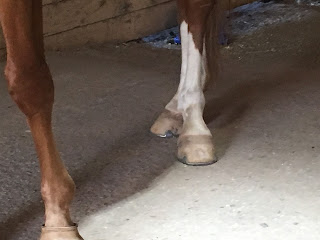 Who doesn't want a horse that stands like a ballerina?

Right now, we walk on hills, play with poles, some backing exercises, leg yields on a circle, turns on the forehand.  That basically covers the majority of exercises that I have found.  I really wish that I could do trot on the hill, but he made that very apparent he isn't ready for it yet.  I am questioning if I could just do one or two and then stop, because he was ok with that.  But I am also terrified I will push too hard and have a huge set back.  The backing is slowly improving, but we have two problems with it.  One, he doesn't back straight (I can't use a whip to keep him straight because he loses his mind at sight of a whip), so I have to use a fence or something to keep him straight.  Also, he doesn't take the clear step necessary to really engage things.  He does more of the only if I have to shuffle.  I am really not sure how to get this crisp.

So are there any other exercises I am missing?  General thoughts?
Posted by EventingSaddlebredStyle at 1:00 AM