The Wheels On The Bus...

Go spinning off... Not really I am being a bit dramatic, but I have gotten greedy with the fantastic rides that Stinker has been giving me.  Apparently, we forgot how to walk again this weekend.  And it wasn't the tense anxiousness that freaked me out the last time.  It was I am being an asshole and don't feel like playing ball today. 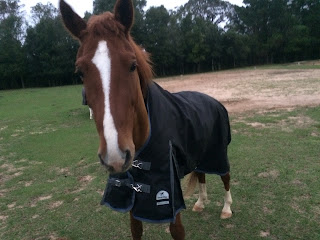 After fighting about walking for the majority of the way back to the barn, I got to a hill and had the thought "If you want to trot you can trot up the hill on the bit."  He did quite lovely and was sulky when I turned and walked him back down the hill.  He decided to trot up it again (I was asking for the walk and not being neutral/encouraging the trot) and this was repeated a couple more times.  Right as I was starting to think that maybe he is strong enough to add in some hill trot work his right hind went from fine to super gimpy.  Like feels very lame gimpy. 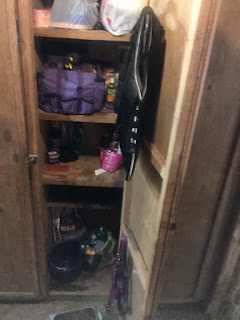 I got my tack locker organized

Luckily, he is smart and finally decided that walking was good, so I was able to get him to stretch a bit and get off without feeling like I ended on a bad note.  I gave him a bath (much to his dismay) and hosed his legs for longer than I usually do.  He didn't seem any worse for the wear and was quite happy to kick his stall with that leg, so I decided I wasn't allowed to worry (until after I rode on Sunday). 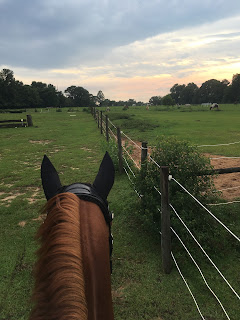 I love this picture, post rain and the sun setting.

Sunday I gave him an extra long warm up and I had a really hard time getting him to slow his walk and soften.  I could feel that he was a little quick with his right hind which was part of the struggle with asking for the slow walk.  He was really tight in his poll (which D had previously said relates to his hind leg) and it took a solid 20 min or more of walk to get him feeling supple.  I did some trot work and while it was pretty mediocre, he did give me some good moments. 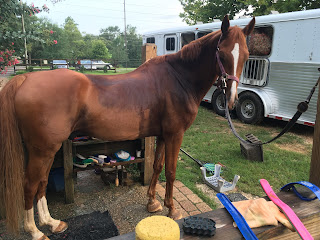 It has been super hot.  This is from 35 min of calm walking (aka not this weekend).

Overall, I am calling things a win.  I kept my crazy in check for once (if I keep this up I might be mistaken for a sane horse owner).  Stinker isn't any worse for the wear.  And I know that he isn't ready for that much push yet.  I am trying to figure out the best way to keep getting him stronger, but that is a post in itself.
Posted by EventingSaddlebredStyle at 1:00 AM