After D kicked poor poor little Stinker's butt I think he was very happy to have me back in the saddle.  I was really pleased how well he came out and went right to work.  Everything went smoothly in the walk and trot for him.  On the other hand, I got my butt kicked a lot.  I have gotten in the habit of having super light contact (good job training me Stinker), but he is ready for a bit more and he stays a lot steadier with heavier contact. 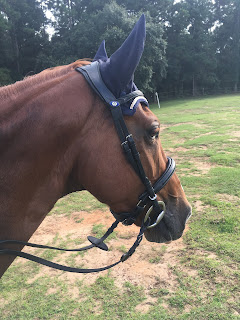 And when I say heavier contact it is normal contact instead of my stupid feather light stuff because I had don't touch the horse's mouth hammered into me for 18 years.  That has been one of my biggest challenges in switching from the western to english riding.  I feel like I am holding too much because I rode with nothing for so long.  So after D kept repeating herself over and over and over with lots of "more" "more" "more" and "don't let it dos" I finally got my shit together and rode my horse. 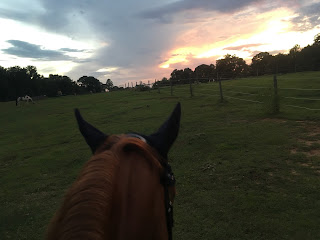 We then got to move on to canter.  We had a total fail and have zero video and only one picture from the whole weekend (oops) and it wasn't even the canter, but it really did happen.  The first time I went to ask for the canter it surprised him and he spooked at my leg (good job Stinker).  I started laughing and D was concerned that his brain was going to leave the building.  I think she was just looking for an excuse to get back on him.  She loves this horse almost as much as I do (I think she isn't quite right in the head just like me). 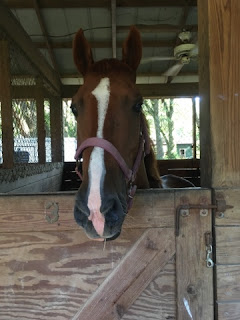 He came back really nicely and the second time he picked up a beautiful balanced canter.  When his canter is balanced it is so freaking amazing.  There is so much jump and he is super adjustable (granted the relaxation isn't there yet, but that is the story of his life).  He is also much more willing to give in the neck, instead of being locked up. 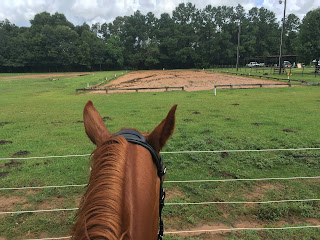 After a few circles and once around the ring, I brought him back and let him walk for a minute before we tackled the other side.  It went just as well.  I was in shock and luckily for me he just stays there and I don't have to put in much effort, because I kind of forgot to ride the first part.  I am still in a bit of shock that everything was just there and felt so freaking good.  Now the tricky part is being able to ride like that on my own without D yelling at me.
Posted by EventingSaddlebredStyle at 1:00 AM