I stole Blue again, but it was for a jump lesson.  I really wasn't sure what to expect because I haven't jumped in about six months.  And it wasn't like I was all that great at it anyway.  I typically have nerves associated with jumping and I was doing better with Pongo, but we were jumping regularly and I was quite familiar with him.  I was pleasantly surprised that I had zero nerves with Blue.

Granted the jumps were not high enough to impress Blue.  He has the mind set of if it isn't solid or big it really isn't worth the effort and tends to be a bit lazy behind.  But he is super honest and is a fun ride (despite being the opposite of my little idiot). 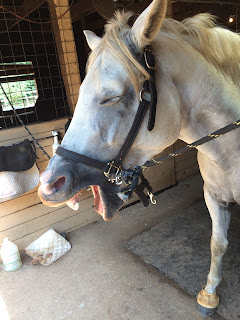 Things started off a bit sluggish.  He was doing his best to sucks back behind my leg and lose all forward motion.  I was carrying a dressage whip, so I could improve the canter by tapping the inside hind and getting it a bit quicker.  And that helped his canter a lot until we entered the grid.  I am not coordinated enough to use the whip and well do really anything jumping related.

I finally convinced him that forward was much better and then things smoothed out a bit.  I was struggling a bit because the saddle does not fit me at all.  My knees hang off the flap and I wasn't able to shorten my stirrups as much as I like.  Here is our final round through the grid.