How I Stole A Calf

This post was inspired by She Moved To Texas's post about catfishing her teacher. I was not tech savvy ever (still fail at this regularly) so I don't have any good stories like that. But I was responsible for stealing a calf (indirectly).

When I was a kid we ran cows on the national forest during the summer. There were multiple people who ran cows up there so we would ride in groups and spread out and everyone would check everyone's cows. The one day, I was (age 6ish) riding with my sister (college age) and a couple cowboys. 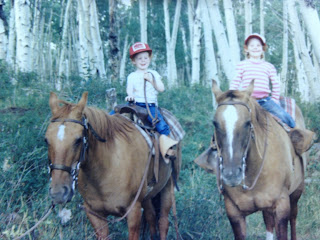 We came across a calf (belonged to a neighbor) that was quite small (days old) and had been abandoned by his mother. Since it didn't belong to any of us and the owner was known for not taking care of situations like that we left the calf. I was bawling because I knew that the calf was going to starve or something would kill it.

Apparently the cowboys felt terrible and went back and picked up the calf. Hauled it down to my parents place (~2 hours one way) and dumped it off. Saying that it was my calf now. It was very obviously not one of my parents calves and they had no idea why it was "mine". 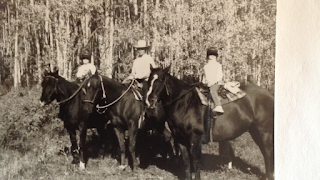 Of course my parents started bottle feeding the calf and because he was so starved he promptly got sick. When my sister and I got back from the mountains a couple days later, I was ecstatic and my sister was shocked (the cowboys were known for being hard asses). And to make things better my mom, other sister, and I were going to the county fair so my dad was left at home by himself doctoring a sick calf.

My to my parents surprise, the calf survived and I named him Smudge. He had a white face with one black spot. We had him for a couple years before he got sold. But that is how I stole a calf. Next up, all the horses I want to steal (don't worry I don't have a trailer).
Posted by EventingSaddlebredStyle at 1:00 AM