This week I had a stadium and a cross country lesson.  Let me just say Pongo is doing awesome!!  I am quite fond of this horse.  He is getting beefy (finally) and loves his job.  He tries so hard and when he gets something, he doesn't forget it.  Sure he is still green and occasionally tries to say no, but as soon as you say yes louder he says ok.  I am going to miss him when I have to give him back, which sadly I think is going to be soon.  On that note back to the fun stuff instead of me getting sad because I have to give up my loaner pony. 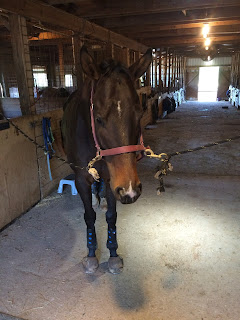 Such a cute pony

Wednesday, I had a stadium lesson and the course was already set for the schooling show this weekend.  I got to test ride it, since I am still pretty green and Pongo is greenish too S thought we would be a good pair to test the course.  It rode really well and had lots of bending lines, which I like.  There were two spots that I had a bit of trouble.  The first one was about half way through the course. We came off of a bending line and had to roll back to the left.  Pongo kept getting a little hot off the bending line, so I had to really sit up and bring him back to make the left turn and hit the next jump.  Towards the end of the course there was a triple, which S took down the first jump for me.  When we did the course the first time, Pongo tried to spook at the first set of standards.  I managed to keep him together and straight enough we made it through the double.  The second time through, coming out of the double I turned too sharp and almost missed a jump.  Pongo forgave me for the crappy set up and jumped it anyway.

S said this was the best she had seen us and I was doing really well keeping my leg quiet and my upper body in balance.  Initially, I struggled not throwing myself forward.  I feel like Pongo and I are really clicking and are building a nice relationship.  He trusts me enough to stay forward when he really wants to spook and go the other way.  And I trust him enough that I don't ride too defensive (I get a bit defensive on occasion, but it is usually when he gets behind my leg). 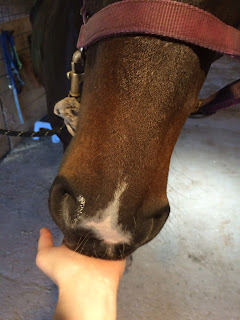 Someone got paint on his nose from messing with wet jumps.

Thursday, we did cross country.  I haven't done a lot of cross country.  I did the clinic in August and schooled one other time before I got hurt.  My biggest take away was I am hella out of shape.  The one good side of not riding Pongo as much soon will be the time.  Maybe I can actually get my butt in shape and maybe meet that goal I stupidly set when my ankle was still messed up (It is still funky.  Randomly swells up and occasionally sharp pain and the whole lack of mobility.)  Four jumps in a row and I was huffing and puffing like the big bad wolf.  Pongo was ready to go some more.

We started off fairly easy with some jumps around the water complex that I had previously done.  He was pulling nicely to the fences, but still letting me set the pace.  We struggle keeping things together going down hill, but he was staying with me and was nicely balanced.  Then we moved up to the top pasture.  I don't think I have jumped any of these.  But I got to jump the scrabble jump!!!  It is a brand new jump that A built (he builds some amazing jumps and we are so lucky to have him as the barn owner/manager).  It is built to look like the holder for the scrabble letters and has the barn name as tiles (points included).  The craftsmanship that went into the jump (and lots of the others) is astounding.

Pongo wasn't as excited about the jump as I was.  Once he locked on to the he tried to say no.  I told him yes, he then asked to go right, then left.  I just kept my legs on and said yes you are going over this thing.  He jumped it really well.  Didn't over jump or try to shove his head between his legs while we were in the air.  The second time over it, he didn't even try to say no. 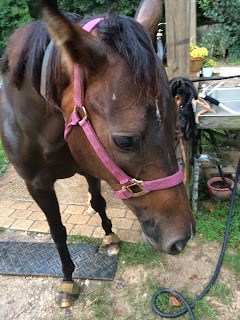 Such a worried face

We did a variety of jumps up there, including the "eyelash" (series of poles that are upright in a curved line) which I thought was spooky, but Pongo was totally down with it.  I really hope there is another schooling show that some of the girls are going to this fall that maybe I can take Pongo to.  I think it would be so much fun.  The highlight of the day for me was the last series.  We ended with the beginner novice bench.  I had thought beginner novice looked big, but when Pongo and I were approaching, it didn't look big or scary.  I guess this feeds into our trust that we are building.  He knows I will take care of him and he will take care of me.  He jumped it beautifully out of a really nice forward gallop.  No over jumping, no peeking between the knees.  S was really happy with the way we looked.

We ended on that, mostly because I was starting to get tired and I didn't want to ruin a good lesson and the confidence that Pongo is building by pushing myself to where I was getting sloppy.  I can't express how happy I am with the improvement Pongo has made since I first rode him in the spring.  He was braced, wiggly, and quite frankly steered like a drunken sailor.  We still have some bracing, wiggles, and drunken sailor moments, but they are decreasing.  He supples to the left (before it was like trying to bend a 2x4).  He has a top line and proper muscling in the neck.  I am so impressed with the way he is getting beefy and filling out.  He lets me correct his shoulders and will go in a straight line.  I really wish I had a before and after picture or video.  But all I have is this adorable picture of the Stinker and Pongo. 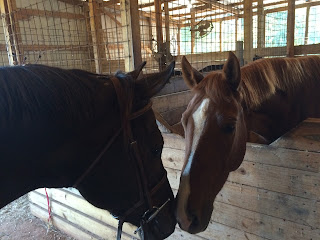 I was waiting for squealing, but they were good boys

Posted by EventingSaddlebredStyle at 8:56 PM