This one is a little longer, but I have my highlights. Best way to watch it is to skip around and watch our screw ups. There are some funnies in there.

Overall, I think we are improving. There are several things that need attention, but I was rather pleased with this ride.

0:40 this is what I was talking about with the scooting hind then trying to canter when I try to close the door on the scoot
2:00 I think that he is developing a new type of tension. Instead of getting stuck he wants to bolt forward. I'm fine riding through it but is there something else I need to do?
2:20 he got quick through the corner and Teresa forgot small circles apparently
2:30ish I was trying to tighten the draw reins and get him to drop his head and stop bracing with the under neck
2:50 I think I had the draw rein too tight when I asked him to flex (I made D laugh here because I sounded so surprised when I told him he was a good boy. It was the first time he gave like this under saddle, so I was surprised.)
3:20ish we get a little quick when I post but he is reaching under with his hind more
4:00 I don't think I have gone right at all
4:25 I'm not sure where my balance is but I'm trying to do some contortions
4:35 and we have scoots. Is that his evasion so he doesn't have to bend his rib cage?
4:50 I'm not sure why he thought my leg was a monster
5:15 I think I'm trying to flex him because he was locked.
5:40 I tried going left to show him what I wanted
6:00 apparently I only want to have one ass cheek in the saddle
7:05 he let me bring his nose around. I was cheating with the fence but I'll take it.
8:30 finally remembered to do some smaller stuff and changes of direction
9:35 so much under neck
10:10 I tried some one loops. They were a little awkward.
11:30 tried some leg yield. Not as good as his...
12:40 technical difficulties...I think he felt too constricted
13:00 oh lord is all I have to say
14:20 we kind of got it together ish
15:00 poor guy is tired. He never feels tired when I'm riding. 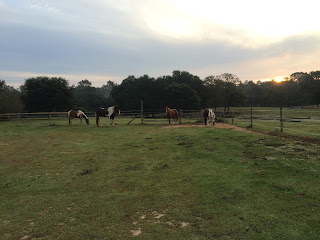 I love this farm.

Keep your shoulders back behind you and sit up taller for the downward transition more. You look a little mousey when you want him to slow. I didn't see anything with the hind scooting issue that had me saying "do this". I think you handled it well and worked through it. Remember forward is always better and you calmly brought him back and he came back to you. You have things lined up a bit better and he gets a little scared of his own butt when it's in the right place. Being a youngster in order to relieve the pressure it is easier to canter. At this time, I don't see any reason to over correct it. I like how you dealt with it and he didn't blow up.

Now, I see the scooting, but you aren't losing the haunches. He is running out through his shoulder. So, you need to use your outside half halt. It is completely obvious to the right. It starts in the shoulder then the haunches follow, so you need an outside half halt, then maybe left leg. Make sure you correct the wither/shoulder first. Think "elbow back to you." This makes him suck his shoulder up not out. 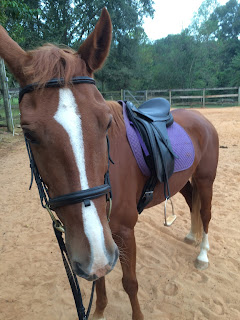 1:28 Slower seat
1:33 Mouse upper body
1:36 This is rooting when he does that sea saw on his mouth it's a rude behavior
1:41 Turn him left I know he hates it
1:51 Well done
2:12 You got the post! Now sloooooow post say out loud upppppppp doooown
2:20 But look he came back and ready his trot only got bigger he didn't get saddlebredy!
2:32 Couldn't see the full correction but whatever you did it worked
2:34 You wanted to post but you were hesitant so you flung yourself out of the saddle and he went OMG! LOL
2:39 Gather your reins (I think I've said this a lot)
3:12 Pause at this moment gorgemous seriously
3:37 He listened to your voice comment. Please praise him!
3:49 Outside half halt
4:10 Outside half halt
4:20 Work the neck
8:02 He blew you off because you had him totally set up for that turn correctly and last minute he went crap too hard so he ran. Whoa his behind small circles then proceed
8:28 We've recouped relaxation

So from 5:50 on, you both lost some focus and coordination. You lost confidence and a game plan. You wanted that relaxation back, but you weren't sure if he was done or if you were going to make that tension worse. So you kind of ran around in limbo. He felt you get out of the drivers seat, so he left the building. You had moments, but we lost the consistency from the beginning.

It could have been you guys got tired or it could have been in your heads. I am not sure, but get a good minute and then quit next time. He gave you a stellar 7 or so minutes. Always, end before it gets crazy and when you feel the crazy setting in and its not going away. You need to give him a task he can complete and then be done.

It is hard when you have that amazing feeling you had at the beginning. But you need to be careful not to push too far. It is great you two are getting there, but it will be baby steps on the longevity.

Notice how the trot poles in this video helped him. This will get even better with my trot pole boot camp instruction. Also, I need you to ride the head a bit more, ESPECIALLY when he wants to get all nutty on you. I need those reins at like half the length. I know it is a bit backwards from anything I have ever said, but you stay out of his face a bit too much. I need your hands guiding the energy down to the ground not up and out. If you scrutinize your hands they are directing that energy up.

I saw the most confidence from you I have seen since he has been back in work (when he is being good). I need you to transfer this to when he isn't being good. When he says no, I need you to say yes about double of what his no was. Think about how I sound when I have corrected something too many times in a lesson for you. It isn't mean, but my tone changes and makes you go "crap." Suck some air in and put yourself in the lines a bit more. I need you to hear that tone and transfer that to him.

You had some much improved canter transitions through. I need to show you how you need less seat and catch him in your hands. That will also force you to shorten your reins. What I want from you is to be out of his face when he is doing the right thing. When he is trying to hit the sky, I need you to be up in it. As soon as he is good you can go back to being out of his face. 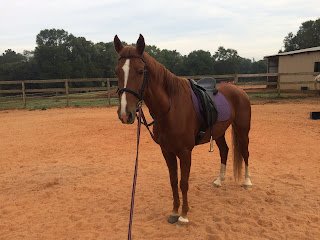 Such a cute face

I realized at the end that I pushed too far. I wanted to challenge him a little more to see how he would react, but I went too far. Most horses I feel when they start to get tired, but with him I don't feel the difference.

The head is a struggle. For some reason I don't realize he has it up. When it finally clicks, I bring it down (I think I managed to do it twice), but it doesn't last very long. As soon as his head starts creeping up my hands join it.

The canter transitions were not my idea, but D said they were pretty and I will still get 2 gold stars this time for them.

Overall, I haven't really had much time to practice these things. I already videoed my next lesson (work is about to get crazy busy and I didn't want to slack). But...we did do ground poles for the next one. I totally failed at the head/lower my hands thing. It does look better than it felt. My plan is to keep practicing and hope something clicks in my little noggin.

To Do List:
Head down and hands down.
Trot poles.
Transitions.
Shorten stirrups to do 2 point 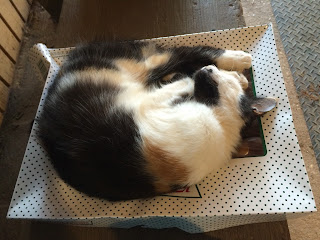 This box still has the doughnuts...and the kitten passed out on them
Party hard!
Posted by EventingSaddlebredStyle at 9:18 PM