We played with poles again.  I did a slightly better job with my pole circle still not great.  I need to take notes from setting up the circle jump grid.  I only had a short line of poles that was straight.  I was short on time, and leading Stinker every where when I was setting up poles.  He didn't think much of that, especially when I was trying to drag two.

We had some scooting left problems starting at about 2:40.  From 3:00-4:15 we were scooting left (did I mention we had some scooting problems?).  I tried sending him back right and he blew through all of my aids.  I took his head away to the left first, then to the right and there was no change.  We finally stopped scooting when he just about put us in the fence.  That was the only thing that broke the cycle.  When I tried to make him step back to the right (he had no more room to go left), he started vibrating.

At that point, I decided since I didn't know what was causing the problem I didn't want to accidentally do something that put us into the fence.  So, I let him circle to the left and then brought him back around to the camera.  The same thing happened at 4:30.  He got very up and down so I tried to send him forward and it resulted in running out through the left again.  You can tell in the video that he is ready to launch.  At 5:03 we leave the camera frame yet again.

When I brought him back around, you can see he is very unhappy about circling right.  I managed to use the poles and keep us on camera.  Mostly I was just trying to get some sort of a circle and stick with him.  Around 6:00 I seem to get his brain back.  I still can't figure out what happened.  He lost his marbles and I don't know what triggered it or what to do to fix it.

I do think that I did a decent job of keeping his head lower.  Also, I think we had some nice moments in there, aside from the fact that I suck at setting circles and I haven't quite figured out the distance to set the poles.  The last time through the poles, I managed to half halt him effectively, so he didn't just start launching himself over the poles.

I don't have a ton of comments, which is a good thing.  I like what I am seeing in the trot and I feel like you two handled the poles much better this week.  I am really liking how you are dealing with the tough moments.  Not that it always goes your direction, but I see you staying with it and I see him stopping the chaos.  Also, I don't hear you verbally calming yourself.  I think it is time to start tackling that canter.

On the note of the dragging you away the first time, it is really hard to say even seeing it.  Probably would have been something I would have needed to feel.  But if he hasn't repeated the behavior then I would say it was a baby horse day and for get it.

I feel like some of the prancing/leaping reaction that goes on around 4:55 looks like he is trying to avoid life.  May it may have been a hey let's take a run day?  Then maybe work on the trot, then gallop again.  The important thing is he would leap and you were not over correcting, then he would stop.  The dialog going on between you two was something you were both still hearing through the chaos.

I think D hit the nail on the head about it being a baby day and him just needing to get out and run.  I thought about that, but I wasn't feeling very secure and really wanted to get the video.  In the future I won't pass on the letting him take a lap around the pasture.  Since then I have ridden him in S's jump saddle (she has it on demo and its the same one I ordered).  He was so good.  It was during the clinic so there was a lot going on, but he stayed with me and actually walked.  I really need to do something about the saddle fit.  I think that is one of our major problems right now, but I am going to try him in the jump saddle a couple more times and see if the relaxed Stinker is still there or if it was a fluke. 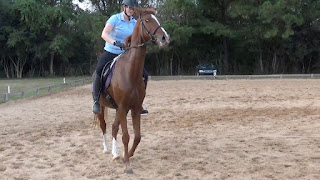 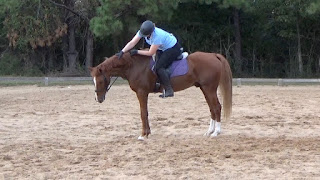 He can stand and drop his head AND stretch his neck!

Posted by EventingSaddlebredStyle at 2:00 PM