Poor Pongo has been neglected.  He pulled his shoe and didn't get it back on until the end of last week.  I didn't get a chance to ride him before I had friends come into town, so he got the weekend off.  Yesterday, I ran out of daylight and energy to ride him, so that left today.

I rode Stinker first (he requires a lot of energy and I learned the hard way not to ride him when I am tired.)  I was all ready for Pongo to be an asshole.  He was being a butt on the ground and he hadn't been ridden in two weeks.  I was questioning my wisdom of riding two green horses back to back, but I put on my big girl panties and came up with a game plan. 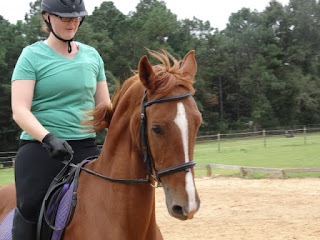 I decided I was going to ride in the pasture behind the barn, because the side ring was being used for a lesson and I wanted to hop over a few jumps to see if my ankle could handle it.  As a side note I realized I was 2.5 weeks away from the clinic and hadn't jumped in 6.5 weeks.  Freaking fricken fracking ankle.  The darn thing won't get better.  So my plan was to make him walk, trot, and canter on the bit with bend.  Then do a few leg yields and pop him over a couple of the small cross country jumps.

I rode with my dressage whip because I figured I was going to need some back up.  I was so wrong and I am not sure when I was as happy to be wrong.  He put up some fuss when I first asked him to supple, but I asked for a leg yield and popped him on the bum when he didn't move over.  After that it was yes ma'am to everything.  Even our leads, which have been a mess due to the whole over bend thing, were good. 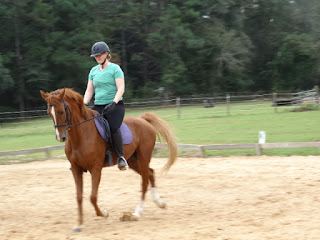 So stinking cute, and as close to lowering his head as we get right now

Some of our jumps were a little awkward.  We got too deep to a couple, then I over compensated and put on too much leg which resulted in a couple that were long.  But considering I still don't have an eye for the distance and he is green they weren't bad.  I would be more worried about it if we were jumping bigger, but we will get things worked out when I have an educated eye watching.

I rode for maybe 10 minutes and I got everything accomplished that I wanted, so I told him he was a good boy and walked back to the barn.  I was in a bit of shock and I must say it was nice to be able to walk a horse.  Heck I can even drop my reins and walk him back with my legs.  It is a nice change of pace from Mr. Prancing Pants. 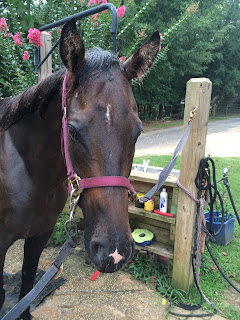 No new media of him.  He has gotten chunky.

Posted by EventingSaddlebredStyle at 11:00 PM