We started off to the left fairly nicely.  When we switched to the right, he got a little sassy, but I think I handled it fairly well.  In these moments I really need get my butt tucked under me. 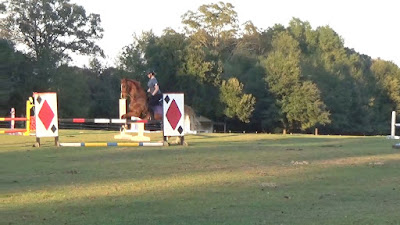 Is this how a canter depart is supposed to look??  It is uphill...

Overall, I liked how willing he was to let me get the trot back, even when the canter was wild.  We did end on a relaxed note with some "stretching" I use the term loosely, but for Gatsby it was stretching.

OK so this week's big theme is your legs. They are pushed way out in front of you most of the time which isn't giving you any base for your seat to tuck under you. This needs to happen in your two point. That's also why he can run out to the outside on you all the time because you have no outside leg guarding that body. This was even more evident in the canter when he picked up the wrong lead. Your reins also need to be shorter in your two point.

We always say lazy horses your leg needs to be come off and hot horses they need to always be on. Yours are always or mostly off

2:57 You needed an outside half halt sooner you got to it later.
3:21 Really nice posting rhythm.
3:24 His neck is nice here. It could be longer but for the arc it has he is working correctly through it.

Now you have to make sure nose doesn't tuck with it. Think push just his nose out. Picture like if you were lifting his nose after giving him paste. This feeling is different than when you want to lengthen his whole neck which requires you to extend your arms. 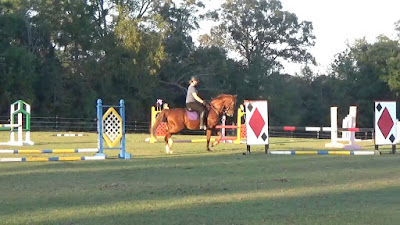 This is where I need to get his nose out a bit more to open everything up.

Engage those outside aids more now. You are missing those a lot which as of this ride is what he needed. I know we've been working on him not falling in but his balance was nice today and therefore he needed those outside aids to shrink the outside of his body.

Trust him in the canter a bit more and go back to basics a bit and use the outside leg in order to ask for the canter this is more for you to remember that you have that aid than for him.

Still be proactive on that left bend being exaggerated when you turn left and he stays there when on the left. He was a little too straight on the left usually just when you were in the cantering mode. If you were just trotting you had a better hold on it.

I'm seeing him being confident with the canter and him getting worried after because you are. I think you can trust him a bit more and just follow.

You've gotten him much more organized we get to go back to picking on you!

I agree completely about the legs. I realized today I am only using my thigh and no lower leg. When I do put my lower leg on he gets very frazzled so I need to work on altering that reaction.  Also, I need to up the yoga and get my hip flexors stretched so I can keep my legs under me.  And by up the yoga, I mean get my A** in gear, because I have been slacking. 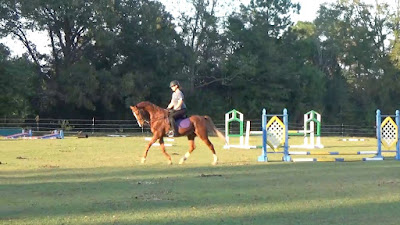 Legs are about a foot in front of my hip, but Stinker is actually tracking up.

I was not sure I understood the paste part when D was talking about where his nose was. Basically she wants me to wiggle my fingers to *hopefully* get him to start reaching for the bit.  This will help open up his neck at the throat latch and stretching to the contact.

I am definitely getting a bit discombobulated in the canter. Everything starts to feel more like a bolt than an actual canter and I start to worry and forget to ride.  I realized when I rode today, that I also need to add in flexing him in the canter.  He gets very locked in the neck, and I think when I can start unlocking that, it will help me feel more in control. 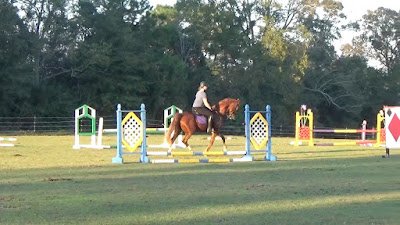 Still terrible position on my part, but we were in a nice rhythm.

As a side note, I finally got my act together and used my video system that tracks me without having a technology fail.  YAY!!
Posted by EventingSaddlebredStyle at 4:53 PM