Day two of the clinic was cross country day!!!  It was a super fun day and I have a very long introduction video (very crappy sound; it was super windy) with Sinead Halpin explaining pretty much everything.  To start things off, she had us find our natural balance.  To do this we stood up in our stirrups (no dropping your heels), leaned forward to rest our knuckles on the horses neck.  This put our crotch above the pommel.  Once we had our balance here, we were instructed to remove our feet from the stirrups.  Say what?? I felt like I was in yoga class doing the weird inversions.  Once we were "comfortable" without our stirrups we put our hands out to the side.  This was to test if we were truly balanced.  Pongo only sort of tried to wander off when I was wiggling around. 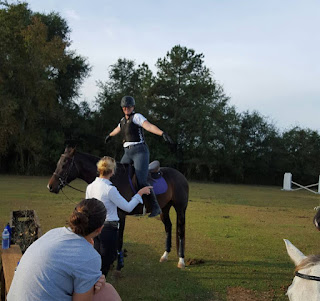 This was to be our position.  It seemed difficult at first, but it was actually much easier to maintain than true two-point.  As a side note I have played too much basketball.  When a coach puts you in something like this, you don't stop until they say stop.  So I was holding myself while Sinead was talking away, my legs started shaking and I looked around.  Everyone else was back in their saddles... Do I get bonus points?


So there are three basic positions, there is cruising, prep, and sitting.  In cruising position, you are in your balanced position.  The goal of this position is to be as still as possible so the horse can just gallop without you influencing them.  Any time your body moves it affects the horse.  When there is something coming, you shift your upper body slightly (the amount depends on how sensitive your horse is) to the rear.  This is something you want to practice until your horse is dialed in and knows that the shift means there is something coming.  Ideally, you can use this to bring your horse all the way back to a walk.  The final position is sitting seat.  This is good for ditches, banks, young horses, and such.  When you are in your prep position, you shift your hips back until they are at the back of your saddle.  This leaves your feet out in front of you which will help if your horse stops.  Make sure your butt doesn't actually drop into the saddle, because this becomes a driving aid.


In this video I canter in the cruise position, then shift back to the prep position, and finally drop down into a walk.  This next video, is all based on the sitting seat position aka ugly sitting trot.  I struggled with this (please ignore my concentrating face...it is terrible) because my dressage queen self wants to sit pretty not sit ugly.


Finally, we add jumps into this.  It is all baby stuff still to get a feel for things, but I was very pleased with how well Pongo was responding.  I was smart and in warm up he got a pop with the whip to get him up in front of my leg which improves everything.

After this, we moved on to the ditch which I already blogged about, so I will gloss over it.  The summery is Pongo doesn't like ditches and over jumps.  We were doing well, then I gave him a bad set up, so we had a few refusals.  Then we got over it and to the cross rail.  Yay ending on a success!

Then we went to play in the water complex.  This was fun and relaxing after the ditch.  We did have one little hitch with the first drop, but that was mostly because I forgot my leg and was too far forward.  You can see it coming from a mile away.


I have some other interesting tidbits from the other groups.  In one of the groups there was a beautiful grey mare.  She was a five year old (I think) OTTB with tons of potential.  Since she was green to a lot of the cross country I was happy to pay close attention to all the tips thrown their way.  One thing that I thought was very useful was when they were approaching a fence/ditch/bank that the horse might refuse because they hadn't seen it before, Sinead had the rider remove leg (and all forward aids).  The reasoning behind this was if the rider is not saying forward and the horse chooses to stop, then the horse did nothing wrong.  As long as the horse was still thinking about going forward it was fine to stop.  I missed this at a couple of regular fences, but I saw it in action at the ditch. 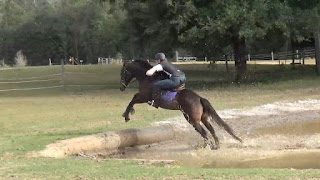 First Sinead had another girl jump her horse over the ditch a couple times so the young horse could see.  Sinead always used a slow approach to new objects.  She says speed doesn't solve problems and it only creates them more in the future.  So everything was done at the trot.  The first 5ish times the mare was still thinking forward, so the rider and Sinead were ok with her stopping.  After the first couple, Sinead had the other girl act as a lead in for the mare.  When the mare stopped thinking forward, the rider got after her and it took a couple more tries to finally get her over the ditch.  Like Pongo she was over jumping, but they kept taking her back and forth over the ditch until she was calmer.  Sinead didn't let the rider make a big deal out the mare jumping the ditch, because it is something that is expected and not something that is huge.  The rider was allowed to tell her good job, but nothing excessive. 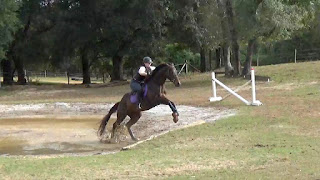 My elbows are always going rogue.

Overall, I learned a ton in this clinic and I would love to ride with Sinead again.  I am so proud of Pongo and the fact that he was such a good boy.  In fact, Sinead used the words "drunken sailor" this weekend and it wasn't in reference to him!!!  Yay! Drunken sailor no more.  My only regret for the weekend is I didn't think to have her sign anything.  I totally should have had her sign the bottle of wine we drank (well it was only half the bottle, but it is all gone now). Such a cutie pie!
Posted by EventingSaddlebredStyle at 7:56 PM