I had a whirlwind weekend that had very little horse involvement, so feel free to skip it.  My sister had her pro BJJ debut this weekend, so I flew out to Denver for that.  Friday was exhausting.  I was up for about 20 hours straight (mainly due to my insanity).  I drive for 2.5 hours to get to the airport so I can have a direct flight, which means I got up obscenely early.

My parents picked me up in Denver and we were meeting a friend of my mom's for lunch.  We ended up driving around for two hours (I was totally hangry at this point), before we found a place for lunch.  I was happy, because I got to have green chili.  Then we went and hung out with my sister for awhile, which was really nice because I usually only see her for an hour or so. 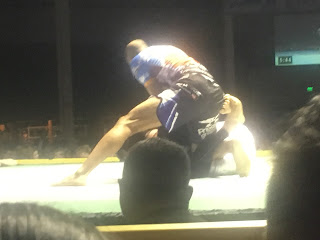 Ok I will admit I totally took this picture to taunt one of my friends since she was home writing a grant.

The fights were really awesome.  My mom sprung for a table and we (my brother and his family and one of my cousins and her husband) ended up being right where the people walked out to the stage.  I had no idea what was going on, but it was fun to watch and cheer.  I told my sister the next time we needed to have a Brazilian Jiu Jitsu expert at the table.  Unfortunately, my sister's match did not go the way she had hoped, but it was still really awesome.

She might kick my ass for putting this up here, but I still think she is a total bad ass!

The next day we had brunch with everyone and then went to the Museum of Nature and Science with my brother and his family.  I hadn't been to it in forever and it was really cool.  Then we went downtown for ice-cream and visited a game store.  My brother has a huge board game collection and I love playing with his family (even if he only lets me play them once so I can't get good at them).  After that I got to have Mexican food with one of my really good friends. 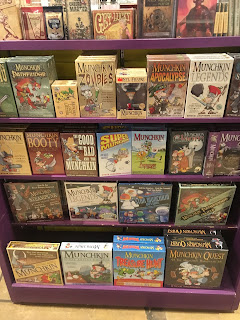 They had a whole section of Munchkin variations.

I flew back on Sunday and went straight to the farm from the airport.  I was really excited for multiple reasons.  One I missed my horse apparently I can't make it two days without seeing him, and two I had a new toy waiting for me.  I had a pretty good ride.  We just walked and worked on being straight.  We did have one moment that made me laugh.  He wouldn't get off my leg, so I touched him with my spur and he jumped like I shocked him and whipped me with his tail.  Seriously, he flipped that thing so it came over my shoulder and whacked my arm.  Oh Sinker.  It took me 18 pictures to get one where his ears are forward, eyes open, and no shadows.  I guess I shouldn't quit my day job anytime soon. 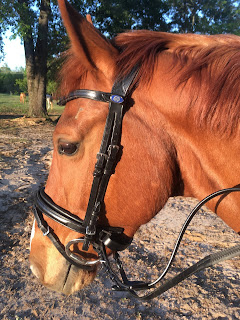 Sneak peek at the new toy!
Posted by EventingSaddlebredStyle at 3:00 AM