I have been feeling a little frustrated lately, because I don't feel especially effective with my leg when I am riding Stinker.  We seem to have two modes, ignoring and OMG it TOUCHED ME!!!!  Not exactly ideal.  I was trying to figure out how to make my aids more precise and subtle.  If it isn't precise he ignores it, if it isn't subtle he panics.  I was toying with the idea of spurs, but didn't really think that they would help.

Then I was looking through Austin's old blog posts and found one about swan necked spurs.  After pondering, and questioning her (thanks by the way), and running my scheme pasts S and D, I bought the spurs.  I figured that a $25 experiment wouldn't be the worst waste of money, because it would either work or it would be such a hot mess I would get $25 of entertainment out of it.  Either way I was ok with the money spent. 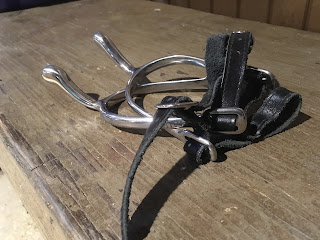 The first day I rode in them, it was in a lesson with S, because I wanted help figuring out when I was touching him with them and maybe some help if there was a melt down.  He was super tense at first, but didn't over react which was a win to start off with.  Throughout the ride, he did settle and while it wasn't our best work it wasn't bad either.  I did think it was easier to straighten him and I can actually keep my leg long and use something besides my calf (I am not sure if that falls under tall people problems or short horse problems).

I also really liked the weight of the spur.  Like Austin said, I felt like the weight helped keep my heels down.  I haven't seen video of myself, so I might be delusional.  But for now I will believe it helps me with my heels.  As far as showing goes, I can't wear them for eventing, but they are dressage legal.  I figure that if I ever get to where I am showing eventing (that is a pretty big if for us at this point), I can survive one warm up and dressage test without them.  Or I could wear another style if I get that paranoid.

Stinker tried to yank them away from me.
Posted by EventingSaddlebredStyle at 3:00 AM