Back in January Stinker got his SI injected. The plan was to give him a six week break from riding and use the equiband to keep him in shape and working correctly. Unfortunately, shortly after my dad fell and broke his hip so I ended up trying to juggle helping with him, keeping my mother from having a total meltdown, and that little thing called a job. Stinker got put on the back burner. Then our weather turned to crap and I got slammed at work. When I was finally able to come up for air it had been four months since he had been in work. 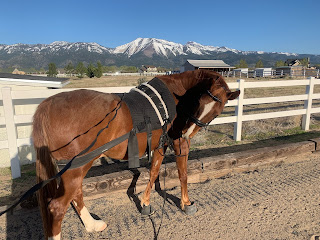 Ever since the EPM he has had a hitch in his right hind. With careful hill work I was able to eliminate it. But with all the time off it came back. I’ve been struggling with what to do with him. He has terrible conformation which will probably result in early retirement but he is also a horse that loves to have a job. I’ve started him back with the equiband but I really needed to get him out on the hills. But since he is so chunky and out of shape and I’m trying to strengthen his back/butt I didn’t really think it was fair for me to start riding him right off the bat. 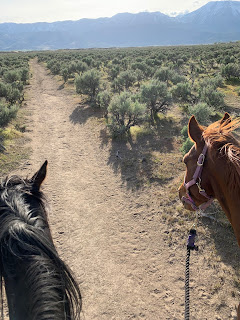 I got the bright idea of stealing Cowboy from my mom and have her ride Stinker. I wasn’t really sure how that would go because typically when he gets a new rider he gets really nervous and riding through that until he settles is super annoying. But she got on when he hadn’t been ridden since January and he was foot perfect for her. I am not sure I will be able to get him back from her but in the meantime he is climbing hills with her and I’m driving him with the equiband. I’ll see how he comes back and then make a decision about his future. In the meantime Cowboy is doing dressage with me. 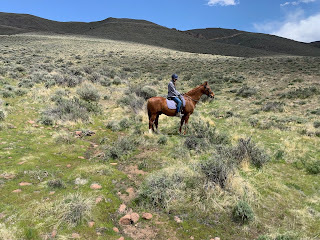 I didn’t really think it mattered to Stinker if he had a job but he turned into a complete crank when I was doing nothing with him. Since I’ve had him back in work he has turned back into the affectionate playful horse I know. So long term he is going to have to have something to do even though f it is a slow wander around the park.
Posted by EventingSaddlebredStyle at 12:03 PM 8 comments: