Poor Stinker had a very busy weekend.  I think I actually managed to make him tired for the first time ever.  For the most part he has been in no to very light work.  For a large portion of it, he wasn't self exercising as much as he typically does because his foot hurt.  He was standing around and porking out most of the time. 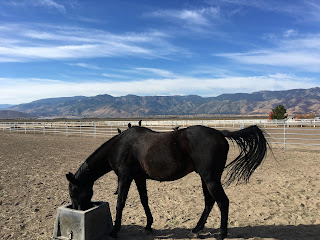 These birds love sitting on the horses

First we hauled up to trainer's place instead of the fancy barn where we usually lesson.  It is just under an hour to her place.  He had a bit of a meltdown on the trailer and was dripping in sweat when I pulled him off.  Thankfully that took the edge off the dragon. 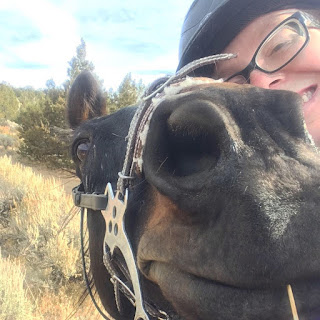 Cowboy was looking for cookies, but I was playing with my phone instead

He is actually most excellent in new places.  The stallion was screaming and raising hell but Stinker calmly started eating his hay and stood like a champion.  In the ring he was all business.  Several of the problems I had been having was me.  I felt like he was leaning really heavy on his left shoulder, but in reality I was pushing him onto it with my rouge right hip.

As soon as I got my hip out of his back, he felt great.  We ended up cantering a bit and the left lead transition was beautiful.  Zero drama.  He just stepped up into it like he is an actual trained horse.  The right lead wasn't as smooth, because he was anticipating and his idea of anticipating at the moment is hollowing and trying to zoom into it. 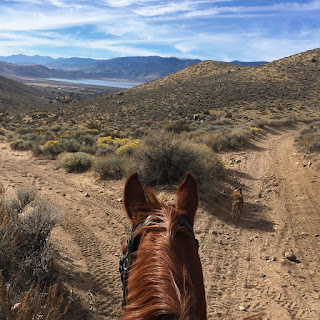 The next day I took him out on the trails.  I wanted to get him climbing, but I also wanted to keep him out of the rocks to protect the frog that is still healing up.  That left one option that has several steep climbs and very deep sand.  He wasn't entirely sold on the whole climbing thing, but I let him take his time (and he was actually taking care of himself for the most part) and made it through the four big climbs.
Posted by EventingSaddlebredStyle at 3:00 AM 5 comments:

I managed to suck it up and make it through 30 miles.  Despite doubling up on aleve, my legs paid dearly for it.  Tuesday was the first day I could go up and down stairs without wanting to cry.  That might be a tad dramatic, but my legs were so freaking sore.

Apparently I am hooked because I already agreed to do another ride.  Honestly don't ask me why.  Maybe pain induce sanity?  I guess that will be my story and I am sticking to it. 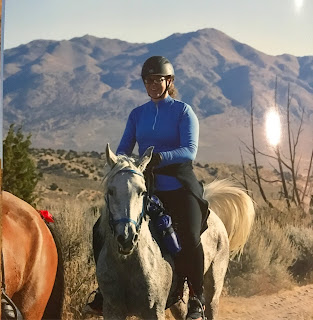 Cola was fabulous and I learned a lot.  Not going to lie, waiting for the final vet check was so stressful.  You have finished, but that doesn't matter until the vet signs off on your card.  In the end we got all As and Bs on the vet card.  Some of the Bs were related to her age (20 years), but the pre ride vet check and post ride vet check grades were quite similar.  Hopefully, I can capitalize on the learning experience and do better the next time.

I did pretty well with taking care of myself, but I need to see if I can ride with longer stirrups.  I kept mine pretty short because Cola is tiny and if my stirrups get too long I can't grip with my calves and end up pinching with my knees instead.  I also really want to get caged stirrups because riding in tennis shoes and my MDC stirrups aren't the safest combination.  I have a few weeks to figure all of that out.
Posted by EventingSaddlebredStyle at 3:00 AM 7 comments:

It’s official. I sent in my entry for the LD ride. The first little grey mare I was going to borrow got beat up badly by a pasture mate. She is supposed to make a full recovery and the attack is going to have surgery to fix the source of hormone imbalance that is believed to be the cause of the attack. So I was offered another horse by a different person. Cola is a tiny (I keep forgetting when I hop off and slam myself into the ground) grey mare. 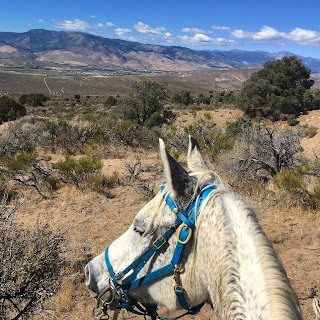 The best part is she is three blocks from me so it has been relatively easy to schedule several training rides. At first I was nervous that she wasn’t in good enough shape to pack me, but last weekend she really hit her stride and trucked along to keep up with the other mare when I wanted to hang back with two other horses. 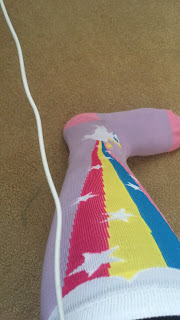 I’m not sure how well I am going to come out of the ride, but I think she will be great. Plus it doesn’t matter if I’m unsound at the end as long as she is. This week I’m frantically trying to get myself ready. Because I also got the bright idea to take a dressage lesson Friday morning before I leave for the ride. The good news is it means Stinker is sound and I got his saddle fit fixed. I can’t believe how much he has changed. Hopefully I’ll be better about blogging next week so I can cover all my adventures.
Posted by EventingSaddlebredStyle at 2:00 AM 2 comments: