Stinker has been doing fabulous with my mom. He is actually a way more reliable horse than Cowboy. Cowboy can be spooky and pretty dumb sometimes (one time he had a fit about water spun around and proceeded to back into the water he was scared of in the first place). But Stinker just wants to go forward and is much easier to deal with. 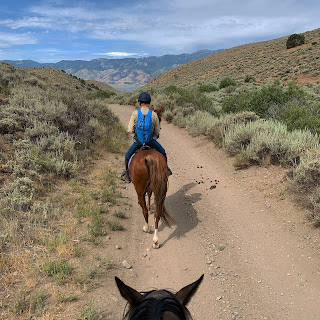 Cowboy has slowly adjusted to being my dressage horse. When we first got him he had an absolute fit about bits, so I put him in a hackamore and that is what my mom always rode him in. I would occasionally ride him in a snaffle but for the most part he went bites. I was expecting to have to deal with him having fits about the bit, but really he has been quite good. He was reluctant to learn how to bend, but he is getting there. Most days we have a reliable leg yield. His right lead canter is a bit hit and miss but that is a combination of my unevenness and his preference to lean on my right leg. We even had a lesson and he was a very good boy. 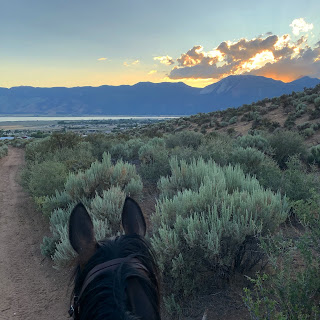 I am still playing with the endurance mare, Cola. She got a bit out of shape over the winter and I was pretty worthless at the beginning of the summer, but we are finally getting back into shape. We were supposed to have our first LD this weekend, but in true horse form as soon as I mailed the entry she came up lame. We think she is on the mend, so hopefully that continues. 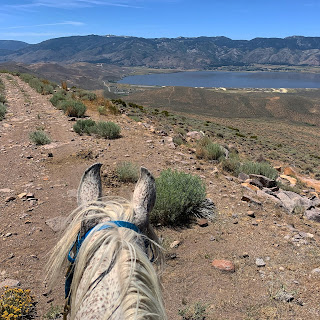 We did get to explore new trails. I hadn't been up to this lake before and it was stunning. The downside was it is super popular with mountain bikes and Cola was convinced they would murder her, but we had to be in the lead because we had another horse that was utterly terrified of them that needed to be sandwiched in the middle. Overall it was a fun day and the mountain bikers were super nice (especially when the one horse just about jumped off the road because the guy didn't actually stop). 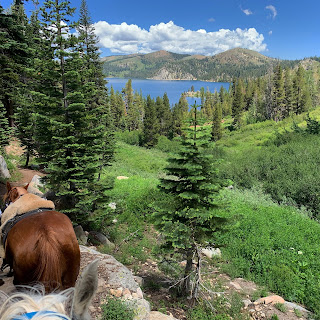 I have been tormenting my mom's dog, Socks. He was looking super cute sitting and the sunset was really pretty, but when I moved to take the picture he took off for the barn (he is totally obsessed with the horses). So I told him to sit so I could take the picture, but of course he started worrying and looks terrified. I swear we don't beat him, it is just how he is. 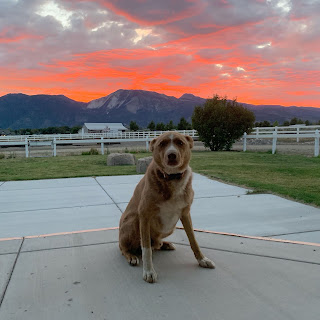 Posted by EventingSaddlebredStyle at 4:00 AM 7 comments: