I scribed for a schooling show a couple of weekends ago and due to some last minute changes I ended up scribing for a semi local judge. After sitting with her all day (and only seeing intro and training level tests) I finally realized what farm she went with. After some googling on breaks, I realized that the farm was a very reasonable distance. I didn't want to be weird and pester her at the show, so I waited until the following Monday and messaged her asking if I could haul in for a lesson. 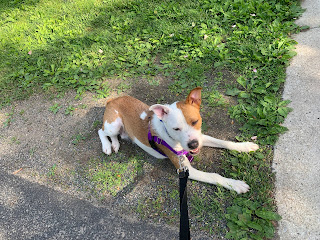 We set it up for last Sunday, so I popped Karma on the trailer and drove on over. The farm is lovely and the outdoor is complete with flower boxes at the letters and a judge stand. It has been a really long time since I rode in a fully set up dressage ring. I think virtual trainer's ring is slightly bigger than regulation (I have not asked or measured it, but it always feels big). Anyway, I managed to get tacked up and hadn't forgotten anything. Everything was pretty disorganized because I hadn't really unpacked or reorganized things after the long trip. 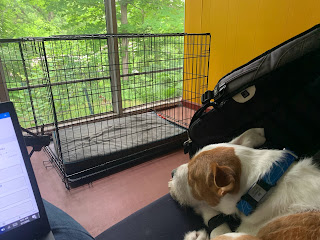 The judge loved Karma, I mean everyone loves Karma because she is adorable but it is still nice to hear. It is also nice to hear that we are progressing nicely and that I have done a decent job with Karma's training. While, she has a slightly different style of teaching from Virtual Trainer, the message was the same. And some of the things clicked better in my head. Mostly we worked on getting and maintaining connection. The two biggest take aways were getting the feeling into my triceps and getting my hamstrings to fire. 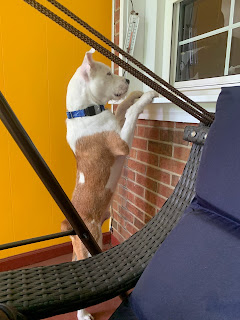 It was a really good lesson and I am looking forward to getting more, because I think having more regular in person lessons will compliment the virtual lessons really well. She also said if I cleaned up the transitions, we could do a lovely training level test. I tentatively put an August schooling show in my calendar. Even if showing in August sounds absolutely awful.