I came very close to having a melt down over the clinic this weekend.  I have been super busy at work (think 10+ hour days with a couple of 12+ hour days).  Last week I only got lunch two out of the five days and managed to put in 6 hours on Saturday before scribing etc.  If you know me, you know I get hangry (a polite way of saying I turn into a raving bitch without food), so me not getting lunch and working 12 hours doesn't go so well.  The point of all of that was since work is crazy and I can't control that I fixate on other things.  The big thing was/is (it is still an ongoing process even if I am in denial) the Sinead Halpin clinic this weekend. 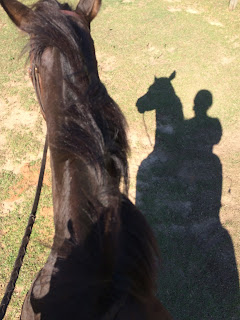 I am in the pre-beginner novice group, which is fine.  There are only people from my barn in my group which is fine.  So what do I have to freak out about? The fact I don't know when I will have time to bathe Pongo.  He is brown so it really shouldn't be a big deal, but I almost lost my shit over it.  The fact that Sinead is staying with me.  This is a legitimate freak out point, but what I went neurotic about not so much.  I started freaking out that my house smells funky.  I don't have a good sense of smell and yesterday I decided it had to smell funny and I just couldn't smell it and everything was going to be a disaster.  Like freak out to borderline tears over the potential that my house might smell funny.  It doesn't...but WHAT IF???  Did I mention I am nuts?

Today I am much better and I think I know what my problem was yesterday.  Tuesday I had a lesson and since we are doing stadium and cross country this weekend, S didn't want to do a true jump lesson this week.  We decided to do ground poles and work on some more technical stuff without really jumping.  I was cool with that because I really wanted to focus on flat work and getting him nice and balanced and supple.  Freaking ground poles are going to be the death of me. 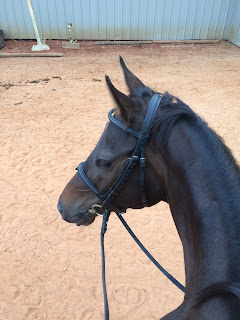 It IS possible to bend left...

First he was being weird and trying to jump the ground poles.  Really Pongo?? I think he was feeling sassy since it was cool.  He was also screwing around with his leads.  I was cuing correctly, but at the last second he would pop his shoulder and pick up the wrong lead (both sides).  I would bring him back to trot then before I could cue the canter he would pick of the correct lead.  Sass master.  Anyway, we were supposed to be trotting some ground poles and he tripped.  He went down to his knees and was scrambling.  Somehow I managed to clinch my legs and stay on, keep my reins, and keep his head up so he didn't roll.  I got pitched forward and almost came off, but somehow clinched (so hard I gave myself a calf cramp) my legs and clung.

We checked his legs to make sure in the scrambling that he didn't whack a leg.  They were fine, but I was a little shook up.  Last fall, a similar thing happened (over ground poles), but the horse and I went down.  My ankle got caught between the horse and a pole.  Nothing was broken, but it didn't help my messed up ankles any.  After that, I think I got in my mind with what ifs.  The rest of the lesson went well.  We even worked on adjustability and I was able to collect him between jumps.  But somewhere along the way my crazy switch was flipped. 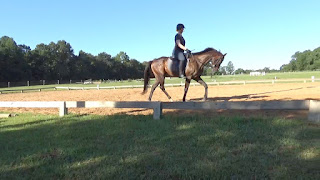 Thursday, I had another lesson and we did dressage.  It was one of the best rides I have had on Pongo.  He felt very loose and swinging through the back.  His neck and poll (especially to the left) were still a bit braced but that is pretty standard for him.  And it is improving.  S was very impressed with his leg yields.  They have gotten pretty good.  Every time he is an ass when I am riding him, he gets put in a leg yield.  There were several minor meltdowns over having to move sideways when we were doing hill work (when his sass usually comes out the most), but it has drastically improved his leg yields.  After this lesson I was closer to resembling a sane person, which made me realize my confidence had taken a hit and I *think* that is why I lost my mind about the clinic.

I am super excited about the clinic and I am not worried that Pongo and I won't be able to step up to the challenge.  I actually feel like we know what we are doing, unlike the last clinic.  I hadn't done cross country and I had barely jumped him.  Now, we are really clicking and have been jumping really well.  I just need to keep my confidence up because Pongo really needs it.  So here is to having a fun weekend with lots of learning.  Hopefully I can get pictures and video.  Yay!!! 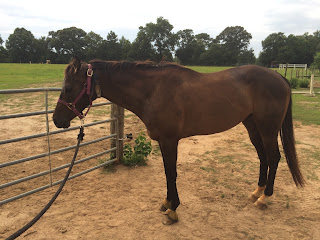 Filthy monster!  Go clean yourself :)
Posted by EventingSaddlebredStyle at 10:00 AM