I was going to write about things in order, but I am still a little too focused on the ditch to write about yesterday.  This can be a sneak peak at XC with Sinead Halpin.  She is AMAZING by the way.  Ride with her if you ever get a chance.

So Pongo and I haven't done a lot of cross country, but we have a pretty solid handle on the whole jumping thing.  We have made a lot of progress with trust and me being able to give him confidence.  Pretty sure I did my best to ruin that today.  I had previously done the ditch and I knew it was spooky to him and he would over jump it.


It isn't pretty but we can get it done...Until that lovely little cross rail is added into the mix and I being the genius that I am screw up the ditch and totally ruin Pongo's confidence.

I am so ashamed of my decision making with this.  I knew that it wasn't going to go well and I didn't do anything about it.  So, we had jumped the ditch a couple of times (see over jumping videos above) and Sinead wanted to add in the cross rail.  I was so worried about the cross rail (in the Nick clinic in August we kept glancing off the cross rails) that I forgot to ride the freaking ditch.  Apparently, I thought it would be good to angle the ditch to line up with the cross rail.  No idea why this seemed like a good idea (math logic: shortest distance between two points is a straight line???), but I did.  I knew I was losing that outside shoulder, but did I decide I needed to abort and get a straight line? No, that would be so smart.

He ducked out of the ditch.  Then, the next time, I was so sure that I wasn't going to let him get his left shoulder out that, I let him get his right shoulder out.  Then I finally managed to keep him straight and get over the ditch, but it was super ugly and I could tell he only went because he got popped with the whip and I had all the leg on that I could get.  Not exactly a trust building exercise.  Not to mention, I got rather flustered/frustrated through the whole thing because I *knew* I screwed up and created the problem.  I might have gotten a little teary.  We had to throw in a few extra circles so I could get my shit together.  Here is the video of our struggles (it is about 3.5 min long sorry).

We did finally get over the ditch and the cross rail, but this pretty much summed up our ditch experience.  I did stay on, and I wasn't even the closest to falling off. 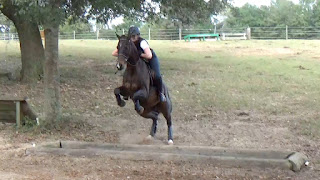 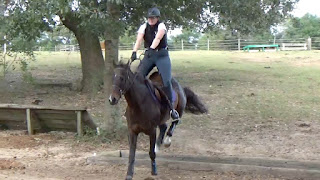 Posted by EventingSaddlebredStyle at 8:30 PM