So, I have been struggling to get this post written.  I really don't know what to say and I am trying to keep things positive.  I have written this a million times it feels like, so here it goes.  When I was in Florida, the saddle fitter (who also does body work, works closely with a vet, and knows a lot about bio mechanics...so I don't think she is a total quack is the point) was very concerned about Stinker's feet and hind end. 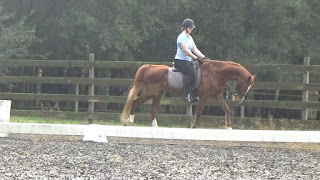 The dip behind the saddle needs to go.

I will admit, I don't know much about feet.  Growing up my dad (who is a vet) did the trims on our ranch horses.  We never had shod horses, and they were all pretty basic quarter horses with good feet.  Plus we were out west where things are wet and sandy.  This year has been rough on the horses feet, we have been drowning in rain.  I know that his hind is still weak from the EMP, but it has been getting stronger and I think I am on the right track with his training.  That being said, I was basically told that I am running the risk of permanent damage if I don't do something quickly.

Stinker's heels have gotten low and the lady said that this is causing his fetlocks to over flex and is putting too much strain on his hind.  He is too weak to support me and this is causing him to pull from the front since he can't push from his hind.  She said I need to get him put in wedges ASAP and that I should only walk him for a month. 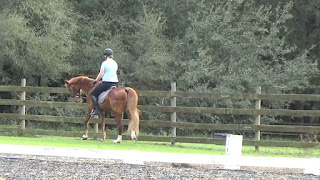 There are multiple reasons I don't agree with her.  One, I think that his confirmation is such that the wedges would create other problems.  He is a saddlebred not a warmblood.  Two he is building strength and improving in the current program.  We started doing the video lessons at the beginning of August.  Since then, we have been steadily progressing.  I monitor him closely and he has not been lame at all and I think he has been getting stronger. 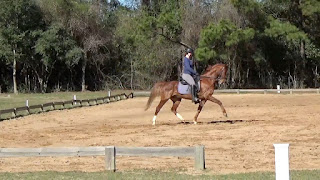 I feel like I have him more put together and it would be
better for building strength than the walk picture above.

My problem is S is firmly on board, and the dressage judge also agreed with the lady's plan.  D agrees with me, but she only sees video and there is a lot you can miss in video.  The farrier agrees with me on both the wedges being bad (thankfully) and the walking isn't the best way to build the strength.  I am getting the vet's opinion, but it is all making me crazy.

I don't know if I am in denial as to where my horse is at or if other people are over reacting.  He is not a warmblood and will never move like a warmblood, so I don't know if they are misunderstanding things.  I trust my gut and I don't think I am in total denial (if I am please tell me...maybe if I hear it enough I will believe it).  But it stresses me out not to agree with educated people who I trust and makes me question my judgement.  The last thing I want to do is hurt my horse. 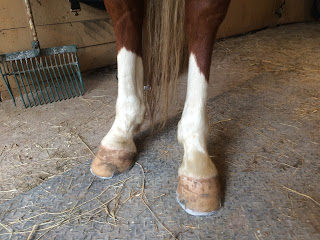 New shoes (he was hot shod and didn't even blink!!!)

In other news, Stinker got shoes.  I put bell boots on, but they have velcro, so he ditched them in the pasture and then stepped on his heel.  He isn't off, but yeah... I am trying to duct tape the boots until I can get pull on bell boots (arriving Tuesday).  My first attempt didn't work well... 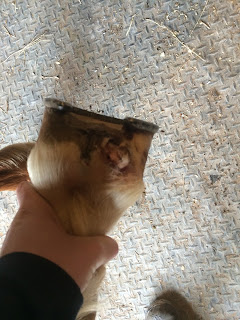 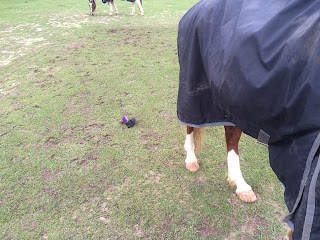 That lasted well...Fricken mouthy horse LEAVE them ON!!!
Posted by EventingSaddlebredStyle at 5:00 AM