Last week I had a jump lesson on Pongo and we got to test out the jump course for the show.  It has been while since Pongo and I have jumped a course.  I think we did one last fall...maybe.  It was a really fun course with lots of turns (some harder than others). 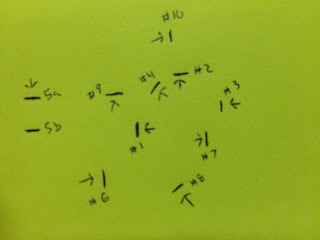 Jump Course (Can you tell I drew it?)

After warm up S had us start with the tricky part of the course.  First we rode the bending line from three to four.  Then we added in the turn to the combination.  I am not going to lie that combo was a little scary.  It looked big and I asked how big it was.  I was kind of hoping by asking S would lower it, but no such luck.  She said it was slightly bigger than beginner novice (gulp). 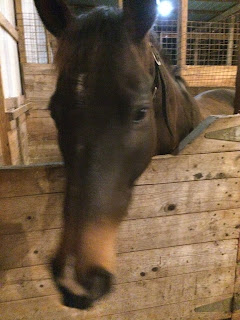 Such a cute face!

The first time, I totally screwed up the turn into 5a and was too far to the right and we weren't straight in the combo.  He thought about bailing on 5b, but I gave him a tap with the whip and he went for it.  It was pretty ugly and I felt bad for the terrible line up.  The next time, I got the line right and we nailed the combo.

We took a break and I "walked" the course.  AKA I rode Pongo around and looked at the lines and hoped I knew where I was going.  The whole thing rode really well, but we did have a couple of issues.  One, coming into the combination Pongo was getting behind the leg a bit, so I gave him a cluck and a tap which resulted in a launch at 5a.  Then 5b was a little awkward and he pulled a rail.  Six and seven rode really well.  He got a little fast to eight, but it wasn't bad.  Between eight and nine Pongo decided that half halts were optional and we totally took a flyer.  I got serious with the half halt and got him back for ten. 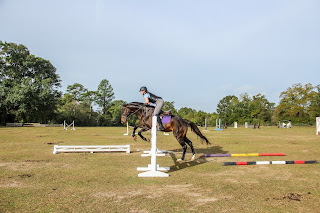 No new media, but he is still cute.

I was really pleased with him (shocker I know...I love this horse).  Sure we had that rail, but that was totally my fault, I shouldn't have given him the tap going into the combo.  I think the cluck would have been sufficient.  I thought the course was really fun although some of the girls at the show were terrified by it.  Maybe I don't know enough to know what I should be scared of...either was it was fun.
Posted by EventingSaddlebredStyle at 3:00 AM