My lesson was canceled on Saturday, so we decided to take the horses out and see if we could catch any of the 100 mile endurance ride.  My mom had seen people putting up ribbons earlier in the week, and they said riders would be coming through right about 10 am.  I was a little worried we would run into some riders on the narrow section of the trail, but we made it up to our watching place in plenty of time. 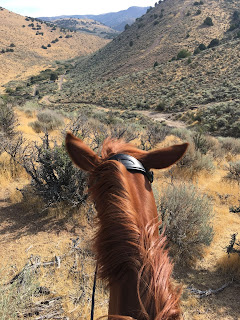 He shook his head right as I took the picture

We stood around for awhile and waited and waited and waited.  Finally, the first two riders rolled through.  They stopped briefly for some water and then rolled on up the hill.  Poor Stinker lost his brain when they went cantering by and tried to bolt.  We were far enough from the trail that neither horse seemed the least bit phased by the idiot horse.  I decided that it would be better if I was on the ground after that. 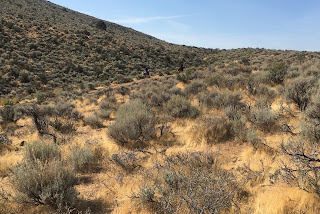 The next rider came through probably 10-15 minutes behind the front two.  Then we waited some more.  Finally we decided that it was getting too late and we needed to head back.  So we headed back down the trail and kept an eye out for horses coming behind us.  Two riders finally caught us once we got to the flat.  Then we started seeing more riders, and got to a total of 11. 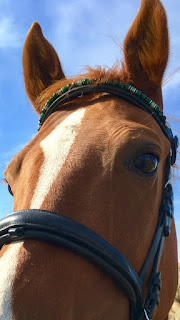 Browband photo because it is pretty and I was bored

I was impressed at how friendly and cheerful everyone was.  They were about 35 miles in and were happy to tell us to have a nice day.  One guy even asked about our horses.  It was the first time that someone has asked if Stinker was a Saddlebred.  I have gotten all sorts of weird guesses about his breeding since moving. 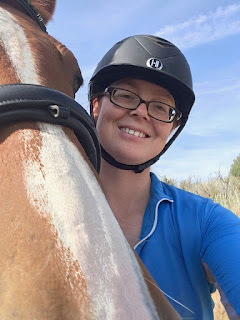 He wasn't down with the selfie taking either

I was a little bummed to find out later that there was a short hold just down the road from us.  I would have loved to have watched it.  I find endurance quite fascinating and want to learn more about it.  Maybe next year I will be brave and throw myself to the wolves by volunteering.  I thought about it this year, but didn't because of my lesson which was canceled anyway.  Should have could have would have.  Either way it was still a fun day.
Posted by EventingSaddlebredStyle at 1:00 AM