I am quite neurotic about Stinker's health and I am always obsessing over his weight and muscling.  But because I am always staring at him and dissecting things it is easy to forget how far he has come. He rapidly dropped weight and muscle when he had EPM.  It was like I blinked and everything was stripped off. 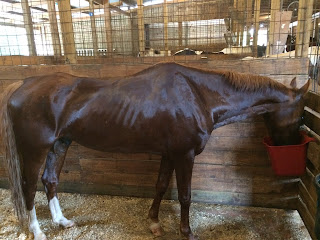 His conformation did not do him any favors either.  Especially, once all the muscle was stripped off his hind and his back was very weak.  It has taken him a very long time (over two years), but he is finally starting to look like a horse again.  I snapped some conformation pictures the other day and matched them up with some that I took in March of 2015, so about a year and half ago.  I was shocked at the changes. 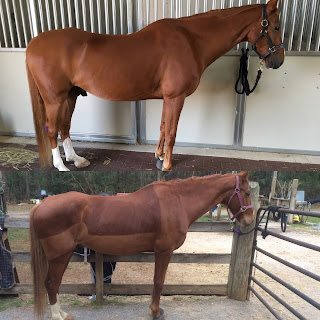 March 2015 was 9 months after he had been diagnosed and he had put on quite a bit of weight.  Plus we had been walking for 2+ months with a well fitting saddle at that point, so he had already started to show some pretty significant changes.  But the biggest changes are seen in his back.  If someone showed me the pictures I wouldn't believe it was the same horse. 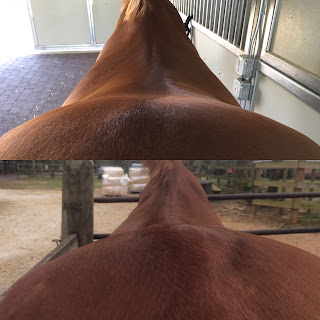 He was standing square in both of the pictures, but you can see how his whole spine was curved to the right from compensating for his weaker hind leg.  Plus he really didn't have and top line or butt muscle.  I still want him to get lots more, but it is slowly getting there.  Hopefully in another 18 months, he will have even more muscle and actually look like a dressage horse.
Posted by EventingSaddlebredStyle at 1:00 AM